There's some bad stuff happening in Florida. Some Republican lawmakers are trying to frog march a bill through the Legislature to close seven prisons and four work camps in Florida. They're doing it to pave the way for a massive, secret and unaccountable privatization scheme.

Yes, it smells. It's wrong and it's unfair.

The prisons slated for closure are in small rural communities. And as the lady says in the video, closing them is like closing Disneyworld in Orlando. 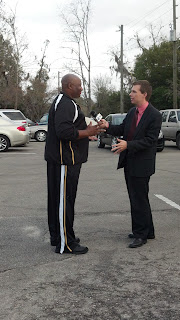 Since November, the Teamsters represent 20,000 correctional officers at the Florida Department of Corrections. We are fighting hard to keep the prisons open and public. The video above shows a community event organized by our Teamster brother, Sgt. Barry Graham, at the Greater Fellowship Baptist Church in Monticello.

It was the second event in two days. The night before, the Jefferson County Board of Commissioners passed a resolution opposing the closing of the prison. Teamsters and other citizens of the community packed the room to show support.  Lt. Jerry Loggins, a Teamster, spoke in favor of the resolution. The photo shows Loggins last night, being interviewed by Jerry Hume at WTXL TV.

Next week holds plenty more action, as Teamsters correctional officers will head to the Statehouse in Tallahassee to ask lawmakers to vote no on prison closings and privatization.
Posted by Teamster Power at 7:55 AM