IN Democrats revolt as Teamsters shout 'Kill the Bill'

These are wild days in the Indiana Statehouse. House Democrats are boycotting the Legislature to prevent RTW-for-less from passing. Teamsters, steelworkers, ironworkers, professional football workers and you-name-it-workers are filling the Statehouse with booming chants. Teamsters who can't make it to the Capitol are furiously writing letters to the editor, phone banking and emailing their legislators.

Here's what happened yesterday, according to the TribStar:

More than 30 Democratic legislators gathered in the Statehouse Rotunda this morning for what they called a public caucus rather than go into the House chamber as Republican Speaker Brian Bosma has demanded. The Democrats began their meeting surrounded by hundreds of labor union supporters, with more watching from the balconies above.

Bosma had hoped to begin voting Tuesday on proposed amendments to the right-to-work bill, but most Democrats resumed their walkout after questions arose about the constitutionality of the statewide referendum they’re seeking on the proposal.

Democratic leader Patrick Bauer says his members will stay out as long as it takes lawyers to review the proposed referendum.

Today the fight continues. Our brothers and sisters at the AFL-CIO keep us informed via twitter. You can follow them at @INAFLCIO. We just learned this.

Sister Cathy Sherwin at the Indiana AFL-CIO has religiously reported what's been going on in the Statehouse. You can follow her on twitter at @cathysherwin. Here's a sample of what she tweeted yesterday:

And isn't this just charming. Corporate stooge Indiana Gov. Mitch Daniels will deliver the Republican response to President Obama's State of the Union address on Tuesday. 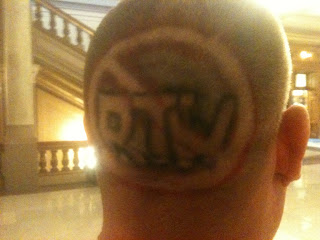 We do like this, though. A barber who's rights are also under attack did it for free!
Posted by Teamster Power at 11:16 AM