Teamsters march loud and proud in IN

Hundreds of working people today marched through the snow to Lucas Oil Stadium to thank the NFL Players Association for joining the fight against right-to-work-for-less in Indiana. Our brothers in the NFL topped a strong statement against right-to-work-for-less with letters from six Hoosier players -- including quarterbacks Jay Cutler and Rex Grossman -- to Indiana lawmakers.

Today our brothers and sisters dressed in NFL gear and union jackets for the march through Indianapolis. Chanting, "Hey hey, ho ho, Right to work has got to go!" were Teamsters, boilermakers, steelworkers, autoworkers. The Teamsters truck accompanied the march with its awesome, awesome, awesome message: "We Need Jobs! Not Political Attacks on Working Families!" One tweeter tweeted "The Teamsters are in the house!"

Rachelle Perry I'll be there!!

Antoine Brown I will be there in spirit. I have my Dolphins jersey on under my work shirt! NO RTW! 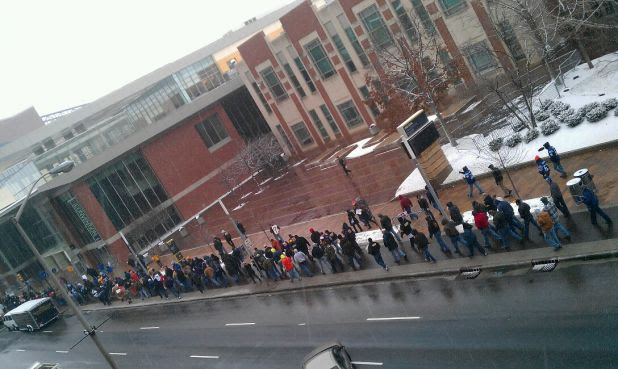 The Indiana AFL-CIO reminds us that Lucas Oil Stadium is the site of the Super Bowl. (Sorry, Hoosiers, the hometown team won't make it this year.) We saw lots of blue jerseys, though, which is what you'd expect in Colts' territory!

The point of the action was to focus attention on -- well, as @MikeConrad tweeted,


Right To Work For Less cuts your pay, takes away your voice, and demolishes a pillar of the American middle class.