Here's the skinny on overweight trucks 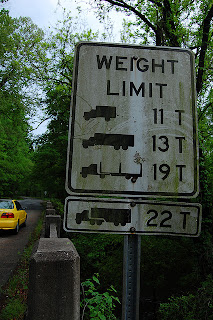 Cross-posted from The Trucker's Voice:

First of all, a huge thank you to the state of Mississippi, Teamsters, and OOIDA, among others, for standing with the majority of truckers as we fight the battle that is ensuing.
It amazes me when I mentioned I'd be doing a piece on this that many were clueless that the heavier weight proposal was still being battled out. It's scary how many things can slip under the rug when everyone is only worried about final rulings on hours of service and cell phones.

The heavier weight limit proposal is a key issue in the economy of many, it is a key issue in highway safety for everyone on the road. We, today, together, will explain it all. Then, hopefully, you can walk away with an understanding of why it's so important to pick up your phone, especially with this year being an election year, call your congress person, and say DO NOT PASS THIS!!

President Eisenhower developed the grid for the highway system in 1956. Before then, the goat trails many oversized haulers love and hate currently are the ones that were traveled by all semis and cars. A goat trail for those of you not understanding the terminology, are rough, two lane roads, that can barely fit a semi, much less an oversized load. During this time frame, 35' and 45' trailers were used. The 45' trailers were used seldomly. The weight was equal to that of the trailer. Therefore, the interstate system was not built for even 80,000 pounds. Yet, now we have 53' trailers now (some have opted to stick to the 48' trailers, but these are becoming a dying breed, as corporate greed of shippers and receivers picks up). Now, we have 80,000 pounds, and the interstate system is starting to scream back. ...

﻿﻿ ﻿﻿If we continue to up the ante weight wise, without ensuring the infrastructure of the highway system is rebuilt to able to retain and maintain all the weight that this proposal will put them under, there will assuredly be more collapses and fatalities to follow. For me, this is a completely unneeded risk to ensure corporate greed rules supreme.Infrastructure Report Card, CNN, U.S. PIRG, Popular Mechanics, and many more, have been reporting a bad report card. No offense, but before asking everyone for higher weights, maybe our dilapidated system should get an A+ first.

Even with all the facts crystal, the lawmakers are listening to corporate greed again. They want to increase the weight limit to 97,000 pounds. Many people may think, "80,000, 97,000, tomato, tomotto." Now, to those people, read the failing infrastructure, read the bridges that have fallen already, and look at it from a different perspective. That extra 17,000 pounds is equal to 8.5 tons, or about 5 cars. That's five extra cars trying to stop at once with you right in front of them.

Basically, it comes down to basic lies and greed. Many containers come off of ships into ports. These containers are then unloaded and reloaded to be able to maintain the correct weight to be on the federal highway system. These port workers are paid well for their work, and they get the load where it can legally move. The shippers and receivers who utilize the port, and in many other places, want to cut the middle man out, and save money. This would increase our already sky high unemployment numbers, and help further cripple our economy by once again finding a way to outsource workers.

Supporters claim this would save fuel, make the shipping costs go down, etc. It costs more money to run more freight due to the fact that a driver's fuel mileage goes down as the weight comes up. Also, who is going to haul heavier again (they've upped the weight before), without being paid more money to haul it? The drivers that are company drivers average between 19 cents per mile for team split to 40 cents a mile, or more. The median average of a truck driver's pay is 34-36 cents per mile. They should not be asked to haul more for free.

Many bridges and roads aren't set up to handle this weight increase. There are posted signs on many of these stating "No trucks over _______ tons or ______ pounds." The regular drivers do not normally touch this. On a rare occasion, they will actually send an oversized load over these bridges while permitted. The oversized drivers, upon noticing the bridge can not hold their weight, are to call and have their route re-routed. If this is not followed, a repeat of the Washington picture will occur. That is correct, general motoring public. We are permitted by the state and can't go on a lot of routes if over weight. Currently, there are stress fractures on the I-10 bridge in Lake Charles. These stress fractures are caused for many reasons. Some are due to age (read when the infrastructure was first made by Ike again), and the increased weights crossing these bridges throughout that amount of time. Also consider that these permitted routes will not be the only ones that others, depending on "reliable" truck GPS, will bring their heavier trucks will be traveling down. To make the easiest point, think of Minneapolis again.

The best and scariest argument in all of this is as follows; new drivers. Many take a little while to get comfortable with braking distance. You see, eighteen wheels do not actually mean eighteen brakes. There are ten brakes. This means 1,700 pounds on every brake would be added. The training practices by trucking schools and driver mills do not properly equip new drivers on what to expect at 80,000 pounds. These drivers would be less likely to be able to handle 97,000 pounds, which would create disastrous effects.
The basics are simple. Say no. Say no because the interstate can't handle it, the economy can't survive that, and all our lives are too precious to risk. Pick up your phone, call, and get them to understand NO!
Posted by Teamster Power at 9:22 AM