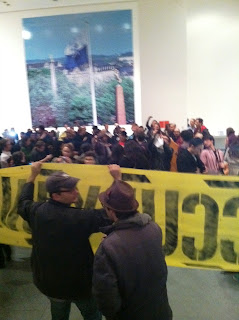 The groups gathered outside of the multimillion-dollar exhibition of Diego Rivera's legendary murals and disrupted museumgoers' quiet viewing experience.


They're not miracles of art. They're works.

﻿﻿The action was chiefly the effort of Occupy Museums, an Occupy Wall Street working group that fights against the influence of the 1% in the arts. As outspoken supporters of the locked-out Teamsters, Occupy Museums activists fight the "Sotheby's economy" -- a system of elite influence that works to "support" the arts with one hand, then grabs at its profit with the other.

MoMa deals with Sotheby's, which threw 43 art handlers out of work because they demanded a fair standard of living from the mega-rich employer.

The visit followed the action last Friday, when Occupy Museums took to MoMa in collaboration with labor activists from Occupy Sotheby's (who had last been seen getting jostled in the picket line clash during the Nov. 9 auction.


We know that OWS can take action and walk the walk, but now I'm even more impressed by this level of conversation taking place. I'm inspired that people who seriously care about art are doing something to help our cause, that this issue stretches way beyond just Sotheby's.

Rivera's works, which depict scenes of life, labor and inequality in the new industial world, were commissioned in part by corporate mogul and philanthropist John D. Rockefeller. When he saw that they depicted a pro-worker message, Rockefeller wouldn't let the work remain on display in 30 Rockefeller Plaza.


Rivera wouldn't have wanted his paintings here. His works stood for the interests of working people, whose voices are being silenced everywhere.

As Sotheby's enters a new auction season having once again broken sales records in the fall, they have still yet to reach a fair agreement with the Teamsters union. Estimates predict that the lockout has by now cost the company more money than they would have spent over the course of the 3-year contract as proposed by the union. with new parts of the movement now getting involved, OWS is throwing the weight of the 99% back into the fight to end the lockout.
Posted by Teamster Power at 9:20 AM