IN GOPer led his own damn walkout in 2001 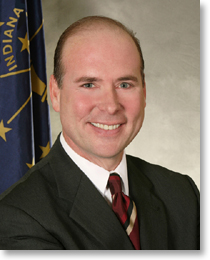 Indiana Speaker Brian Bosma led a walkout of House Republicans 11 years ago without penalty but threatens to impose $1,000-a-day fines on House Democrats for doing the same thing.

Last year, the quisling for the 1% Bosma slapped a half-million dollars worth of fines on Democrats who filibustered a right-to-work-for-less bill.

Now he's at it again. As Republicans try to push right-to-work-for-less through the Legislature like shit through a goose quickly, Democrats are boycotting the session and Bosma is threatening fines.


Republicans walked out in 2001. That was over the redrawing of legislative districts. The walkout lasted two days, and was led by Brian Bosma, minority leader and now current house speaker.

That walkout ended when Democrats agreed to compromise.