What those lovely Koch brothers are up to now 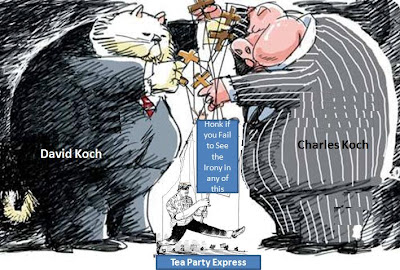 It didn't take long for the tea partying Koch brothers to start retaliating against their critics once the protest against their no-longer-secret confab ended last weekend.

AlterNet describes the brothers as

Politico reports that the brothers are not liking the bad press they've been getting lately -- especially since the 1,500 protesters outside of their walled-off gathering on Sunday got some national attention. And so, reports Politico, they've...


...hired a team of PR pros with experience ... and commissioned sophisticated polling to monitor any collateral damage to the image of their company, Koch Industries. At the same time, through their high-priced lawyers, private security detail and influential allies in conservative politics and media, the Kochs have played hard ball with critics and suspected foes.

Young environmental activists who pranked them have been hit with a lawsuit seeking more than $100,000 in damages, and the leak of an internal document describing their political activities resulted in an investigation – complete with document analysis and interviews of suspects – that eventually identified the mole.

During their biennial billionaire's caucus, they hired a heavy private security detail, which tracked "suspicious resort guests, put up a blockade to block a camera crew from filming arriving guests and threatened a Politico reporter eating at a  resort cafe with arrest.