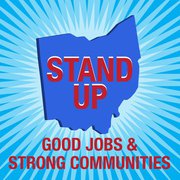 And now we're hearing that a thousand private and public service workers came to the Ohio statehouse today to stop Sen. Shannon Jones anti-worker, anti-community Senate Bill 5 (SB 5). (Here's a handy list of the anti-worker provisions.) There's a hearing on the bill today and another one on Thursday.

We have an account of a press conference today from the ProgressOhio blog, thanks to brother Fred Crow in the Buckeye State. According to ProgressOhio,


...public service workers- including a sewer worker, who identifies as a Reagan Republican, firefighter, teacher, retired state worker - and Columbus area small business owner Liz Lessner voiced their opposition to the bill today, calling it a misguided law that would not create jobs and would hurt Ohio's working families and small businesses.

And get a load of this comment from Lou Geiger, a Dayton sewer workers who voted for Republicans in November.


Nothing speaks more to the savagery of modern day politics that Senate Bill 5. This loathsome piece of political payback is a malicious attack on public servants, our unions, our state economy, and our towns. The bill does nothing to stimulate our economy, bring jobs to our dying cities, eliminate the plague of unemployment, or provide for the greater good of all Ohioans.


Ohioans don't want this bill because they understand it is not only bad for workers but bad for our economy and our small business too. In order to keep their doors open, businesses need a strong middle class who spends in local economies. Senate Bill 5 will only erode Ohio's middle class.

The Economic Policy Institute released a report on Friday that showed Ohio's public service workers were paid a little less than private sector workers, taking education and experience into account.

Here's a firefighters' wife who says the very thought of the bill gives her a mix of angry anxiety in the pit of her stomach.


It’s not just the security of my husband’s job and thus our livelihood on the line. It’s the safety of the citizens of Ohio. While Firefighters are affected, they’re not the only ones. Who else will be affected by SB5? Your police officers. Your teachers. Your nurses. Your government workers. People you rely on for safety, for security, for education, for your day-to-day stuff. The stuff you take for granted. The Middle Class. For those that think teachers or firefighters or police officers or what-have-you make too much money, I’d like you to live a balanced life on our budget.

If you're sitting at a desk, you can sign up to the "Stand up for Ohio" Facebook page. It started over the weekend and has jumped to more than 40,000 friends already.
Posted by Teamster Power at 3:28 PM