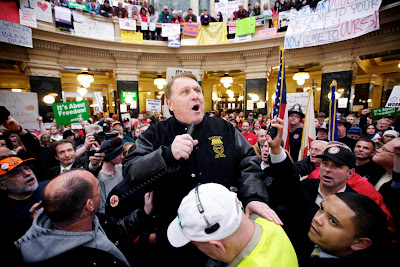 Teamsters are marching into the battle for American workers all over the country. They're showing solidarity for Wisconsin's embattled workers, opposing anti-worker legislation in their own state capitals, or both.

Solidarity rallies are planned this weekend in every U.S. state capital, and Teamsters will be there. In some cities, Teamsters are pounding the pavement in two, three, four and five days running. In Wisconsin, our Teamster brothers and sisters have been making the trek to Madison every day. Saturday's rally at the Wisconsin Statehouse is expected to be the biggest yet, and many Wisconsin Teamsters will be going to rallies in Milwaukee and in smaller cities and towns throughout the state.

Our brother Steven Nelson from Local 200 has driven to Madison all week.


Almost every day we march through the Rotunda. Every time we march in with our banner and our signs, and it's like thunder.  I'll be going by and hear people say, "The Teamsters are here." You get that old Teamster feeling. You feel the hair on the back of your neck stand up.

Nelson is thrilled that students, veterans, non-union workers and retirees are showing up as well. "Everybody's drawn back together," he said.

Yesterday in Madison, Jim Hoffa's appearance nearly sent the roof off the Rotunda. Hoffa stood on two milk cartons in the center of the hall and drew thunderous cheers. "You are turning the tide of public opinion," he said. "We have a saying in the labor movement, an injury to one is an injury to all.


Next year it's us. Next year it's everybody. We know what they're doing and we're not going to let them get away with it. ...You ain't seen nothing yet. You've hit a nerve. and what you've done you've also united all of labor. We know the battle you're fighting is all our battle.  All of labor, from California to New York, is united. We're going to make sure you have the support and we're going to be here for you.

Our brother Aubrey Cheatham from Local 89 in Louisville described a similar electricity in the crowds outside the Indianapolis Statehouse. There, thousands have protested all week against a right-to-work (for LESS) bill moving through the Legislature. Our Teamster brothers from UPS barns all around Indianapolis have been there every day. We're hearing that bill may be dead, but we're not declaring victory until we're sure it's 100 percent dead.

Teamsters stood in the rain for two hours to get in on Monday, Cheatham said. Outside, Chris Sanders, general counsel for UFCW, led the crowd in singing "We Shall Overcome."

Rally Girl here at Teamster headquarters has been keeping tabs on some of the other rallies throughout the country (though it isn't possible to keep track of them all. Here's what she reports.

Canton, Ohio: ...protestors, union members and labor activists demonstrated in front of the Canton Civic Center, where Ohio Gov. John Kasich spoke at the 97th Regional Chamber of Commerce Dinner Tuesday evening. Teamsters, teachers, firefighters and community groups are speaking out against Senate Bill 5 which, much like the Wisconsin budget proposal, would end collective bargaining for state employees.


Our governor is doing about the same thing to unionized workers here in Ohio. They’re using the economy as an excuse to break unions. I was thrilled to see so much support for our cause. It’s the first time I’ve seen anything like this and it’s very encouraging.

Boston, Mass.: Showing solidarity with Wisconsin state workers, hundreds of union members and labor activists in Boston, including Teamsters, rallied Wednesday in front of the Statehouse on Beacon Street.
As Telegram.com reports, Boston-area Tea Partiers thought they could hold a counter protest, but they thought wrong. Pro-union protestors completely surrounded Tea Partiers, drowning out anti-union voices in an act of defiant solidarity.

Much more to come from Rally Girl. And here's a photo from Brother Nelson in Madison today: 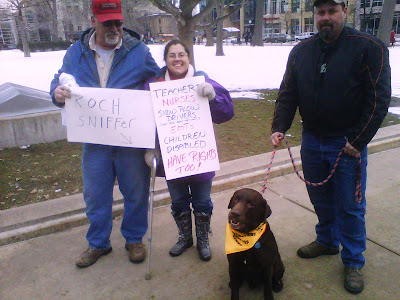