Polls: Public is with us in Wisconsin 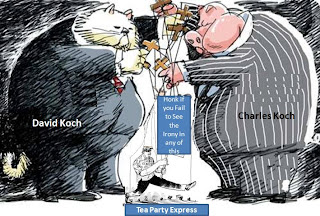 Koch whore Wisconsin Gov. Scott Walker is under a number of delusions, one of which is that most people agree with him. During the prank call in which he was duped into revealing his inner evildoer to a man he thought was David Koch, Walker said this about Republican lawmakers:


And as long as we go back to our homes and the majority of the people are telling us we’re doing the right thing, let ’em protest all they want.

Um, wrong, Scott. Voters in Wisconsin agree strongly with workers who are standing up to your anti-worker agenda. A recent poll found

67 percent side with the public employees.

Here's what the pollsters say: "Walker’s Standing is Poor, while Most Agree with the Unions and Public Employees"

Gallup and USA Today also found “broad public disapproval of the idea of stripping public unions of their collective bargaining rights.” Their poll revealed 61 percent of adults nationwide oppose Walker’s plan to take away these rights from public workers.

Walker not only is trying to destroy the middle class by stripping workers of  their collective bargaining rights, but he insults our intelligence by saying,


Take away a union's collective bargaining rights? I believe that makes them just a bunch of people wearing identical T-shirts.