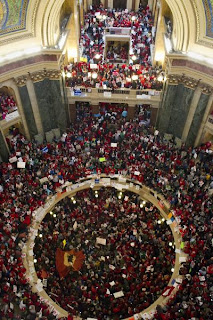 The enormous protest in Wisconsin remained peaceful as Democratic senators left the capital so Republicans couldn't vote on the bill without a quorum. Reports the Huffington Post:

The move produced a frantic political drama, as state troopers were reportedly sent out to find the fleeing lawmakers and Walker hinted that the National Guard would be called in to fill the void left by protesting union workers.

One Democratic senator told the Milwaukee-WIsconsin Journal Sentinel that most of the members of his caucus had already crossed state lines.

Their flight further heightened the drama that has surrounded the Wisconsin statehouse this week. On Wednesday there were an estimated 30,000 peacefully rallying in front of the state capitol building, and on Thursday that number is expected to be even higher.

The Washington Post reported that the Democrats are in it for the long haul and the police officers told them they were with them. Writes Greg Sargent,

Speaking to me by cell phone from an undisclosed location, Larson said he and his fellow Democrats would not return until the GOP takes its assault on organizing rights "off the table."


"Each of us is in a secure location," he told me, confirming that they were not all together but were monitoring events on the Web and on Twitter. Larson refused to say whether he and his fellow Dems had left the state, as some have speculated.

"We're going to be staying away until we hear that they are taking the right to organize seriously," Larson continued, referring to Republicans. "They're going after 50 years of history in one week. Until they take that off the table, it's a non-starter."

Larson said Dems are not worried about law enforcement pursuing them and dragging them back to the capitol. Though the current proposal exempts state police, he said that individual officers had privately expressed solidarity with the Dems' and public employees' cause.

"They understand the importance of workers banded together to protect workers rights," Larson said, characterizing his conversations with officers. "They understand why we're here."

Dems will not return, Larson vowed, "until the Republicans are prepared to listen to the effects of this bill on workers and what it will do to our state."

Teamsters President Jim Hoffa said the protests are inspiring and the Democratic senators courageous. In a statement, he said


Governor Walker is trying to make an end run around democracy. Democratic senators took a stand for Wisconsin workers who won’t be denied a voice in the process. They stood up in the face of injustice.

"
@BenedictatLarge made this offer to the Democrats:


To: WI Dem Senators - You can stay at my home in Florida. Nice and warm. Easy to stay a long time. #NotMyWI #wiunion #killthisbill

Capitol officials say there are 5,000 protesters inside the building, and our sources tell us there have been only 9 arrests. We're also told police officers are getting along well with protesters:


@MelissaRyan  How Madison does it! RT @sjbarlament: Confirming this report. RT @madisonfood: report: Cops are handing out brats to protesters #wiunion

Here's a Facebook page with a great photo gallery

And some more tweets:

@LeeCamp  Count me in. We are all cheeseheads now.

@havoctive  Someone suggested no-water washcloth packs for those at the Capitol... can anyone bring some down? #wiunion #killthebill #solidaritywi

@wbadger5  RT @OFA_WI: Madison isn't the only ones rallying. All across #Wisconsin people have organized worker protests. #solidaritywi

President Obama did a radio interview in Milwaukee and said "some of what I've heard coming out of Wisconsin, where you're just making it harder for public employees to collectively bargain generally, seems like an assault on unions." He added that "it's important not to vilify" public workers.
Posted by Teamster Power at 5:13 PM