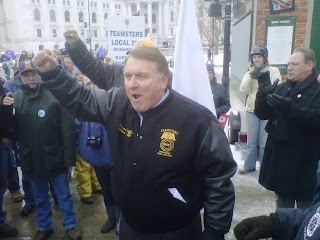 Jim Hoffa took Wisconsin by storm today, marching through the streets of Madison and pumping up the crowd in the Rotunda with an energetic speech promising to stay in the fight for American workers until we win.
The media swarmed over the Teamsters leader, who told CNN "This is a battle for all of labor."

Hoffa pledged to fight on. He told CNN that anti-labor bills had been withdrawn in Indiana after massive protests there. "Then we're going on to Ohio," he said.
He spoke to a crowd of about a thousand outside the Statehouse. Then he marched inside behind the Teamster flag, the packed crowd greeting him with a thunderous ovation as he made his way through the packed Rotunda.
"Labor is in the house!" Hoffa shouted to the cheering throng. "I bring you support from 1.4 million Teamsters.

"We are in it for the long haul and we will win this fight. This is going on in Ohio and Indiana and other states. We are all working together to fight this."

Reports our brother Dan Reilly, who's traveling with Mr. Hoffa,


It's madness. High energy, everyone is upbeat and incredibly enthusiastic. Mr Hoffa just tore the place up and is leading a 'Recall Scott' chant.

Hoffa was interviewed by Thom Hartmann, who later tweeted a much-retweeted quote:


RT @Thom_Hartmann: James Hoffa from @TeamsterPower states that "The entire concept of equality in America has been perverted by Agents of Elitism"

Leaving the Statehouse, he spoke again outside before marching down the street to join a picket line.


Outside again he urged workers nationwide to stand strong together. “This is what it’s like to be in a union and to be an American,” Hoffa said. “Firefighters, SEIU and all these Teamsters here together. This is what being in the labor movement is about. Working together.”
Posted by Teamster Power at 4:59 PM