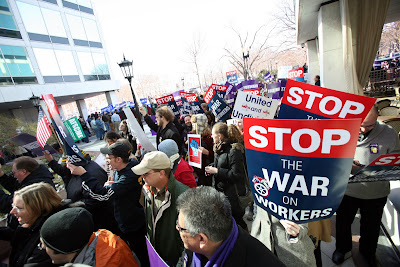 About 150 Teamsters joined more than 2,000 other union members today in a rally in front of the Wisconsin Governor’s Washington, D.C. office, sending a loud, clear message that they will not tolerate attempts to destroy workers’ rights anywhere in the United States.
Teachers, nurses, construction workers, laborers and others joined the “We Are One” rally outside the Hall of States Building. The crowd was so large it spilled on to North Capitol Street near the U.S. Capitol, forcing police to shut down the busy street. Workers chanted slogans, including “Workers rights in every state,” “Kill the bill,” and “Hey, hey, ho, ho, union busting’s got to go.” There were colorful signs, including “Mubarak for Wisconsin governor, Koch CEO,” “Don’t blame workers for Wall Street greed,” and “Stop the war on workers.”
“It’s time for labor to come together with a strong, collective voice,” said Fernando Harms, a business agent/recording secretary with Local 696 in Topeka, Kansas. “


These attacks in Wisconsin, Ohio and Indiana and elsewhere are direct attacks on labor, so we need to stand up and fight.” 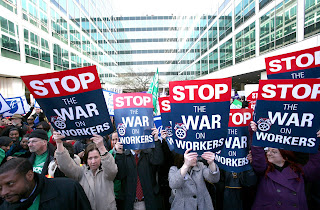 Harms was in Washington to attend a Teamsters Leadership Academy at the International Union’s Headquarters.

Eliseo Mesarina, Secretary-Treasurer of GCC/IBT Local 415-S in Chicago, said attempts to harm unions will hurt not only workers, but the nation as a whole.


Without union members having the decent wages they receive, we’re not going to get this country back on track. 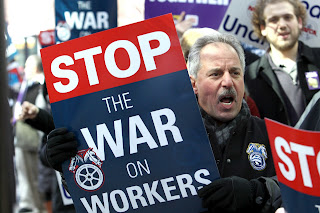 Debra Simmons, Secretary-Treasurer of Local 743 in Chicago, said all union members need to speak out against the coordinated attack on unions and working people.


I’m proud to be a Teamster, I’ve been a Teamster since I was 17 years old. I think it’s important for people to have the right to be in a union, and we need to fight for that right.