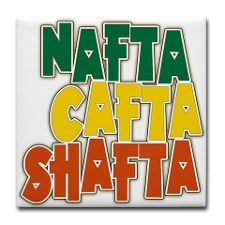 The job-killing trade deal with S. Korea will probably be sent to Congress this week.

Many, if not most, of the 193 Democrats in the House of Representatives will oppose it. A big question is how many of the 50-some Tea Party Caucus members (all Republican) will also vote against it?

We were intrigued to find this website, stopuskoreanafta.org, which has a very Tea Party look and feel to it (e.g., pictures of Ron Paul). We're especially fond of the Donald Trump quote they use, "It’s NOT free trade and only a moron would sign it."

Anyway, here are 10 more reasons, per StopUSKoreaNAFTA.org, to oppose the deal:

3.State legislators oppose it because it undermines State’s sovereignty.

4.Negotiated with expedited Executive authority & Congress is banned from amending or fully debating it.

10.Immigration – throws open US doors to Korea
Posted by Teamster Power at 3:17 PM