It's Solidarity Saturday: What to do 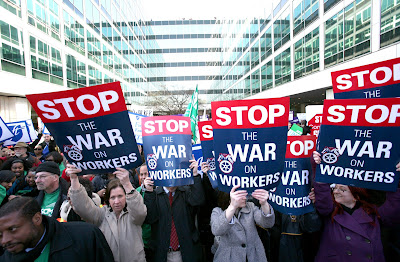 That would be today, when tens and probably hundreds of thousands of American workers will join rallies in all 50 states to hold the line in the war against workers. (If you haven't found a rally yet, go here, here or here.)

Teamsters have the whole protest drill down: show up sober, dress for the weather, bring water and keep your hands in your pockets so they can't accuse you of violence.

But we do have some more advice:

1. Bring a camera, still or video. If it isn't captured in video or photographs, it didn't happen. And make sure you send the results to us (Communications@teamster.org)

2. Don't use vulgarities, either written or verbal. The Tea Party is just dying to call us racist, uncivil "union thugs."

3. Remember the message: We're protesting anti-worker (not "anti-union") legislation that would weaken protections for middle-class families.

4. Share fun facts with each other and any reporters who show up:

Posted by Teamster Power at 8:41 AM