Teamsters in the thick of things in OH, WI, IN, VT (and we're just getting started!)

Indiana Teamsters staged a sit-in at the Indiana Statehouse today as their brothers and sisters in Wisconsin and Ohio marched in massive rallies around their state capitols. More than a dozen rallies were held elsewhere throughout the country.

In Indiana, thousands of union members and students sat down in front of the Senate chamber to protest a scheduled vote on two anti-union bills. Democratic senators House members walked out, denying the quorum required for a vote. Reports the Louisville Courier-Journal,


...angered over a GOP agenda they say is anti-worker, hundreds of union workers and students staged a sit-in Tuesday morning outside the Indiana Senate chamber, chanting, “Ain’t no power like the power of the people.”

Meanwhile, House Democrats continued a boycott that is denying Republicans a quorum needed to move a controversial right-to-work bill, conjuring images of Wisconsin, where Senate Democrats have left the state to avoid voting on controversial anti-labor bills.

And this just in from the Indianapolis Star:


Democrats are headed to Illinois, though it was possible some also might go to Kentucky. They need to go to a state with a Democratic governor to avoid being taken into police custody and returned to Indiana. 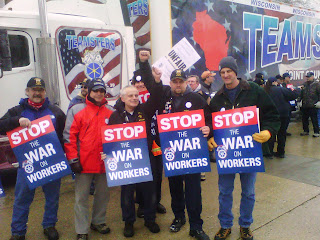 In Wisconsin, thousands of protesters an estimated 30,000 were joined by at least a hundred Teamsters from Milwaukee, Madison, Green Bay, Racine and elsewhere.  They marched around the capitol this morning as two  Teamsters semis -- one from Local 120 in Miinnesota -- served as a gathering point. Brother Steven Nelson from Local 200 reports that the Teamsters have entered the Rotunda, where brother Rick Smith from Harrisburg, Pa., is broadcasting his radio program. Earlier, Nelson said:


We got a good group of union people walking around the capitol. AFSCME, correctional officers, teachers, the International Bricklayers and Allied Crafts. They're shouting "Kill the Bill" and "What's Disgusting? Union-busting!"

Koch whore Wisconsin Gov. Scott Walker remains unwilling to compromise on his union-busting budget bill and the Assembly will once again attempt to pass the legislation today. The 14 Democratic senators (including our former Teamster brother Sen. Dave Hansen) are still in Illinois, preventing a quorum and a vote on the bill. The good news: new polls show Wisconsinites strongly support the efforts of working men and women, and strongly disapprove of Walker’s assault on the middle class.


A left-leaning website that union supporters used to rally protesters in Wisconsin was partially blocked as demonstrators gathered in the state Capitol over a controversial budget bill.

Events were moving rapidly in Ohio as well, where thousands of protesters were denied access to the Statehouse. Our brothers and sisters flocked to Columbus from all over the state, where thousands of workers rallied for the second week to protests SB 5. (We're expecting photos later this afternoon.) The bill would eliminate collective bargaining rights for all state workers.

Testimony before a Senate committee was limited to those who met a deadline that was never publicized. While thousands are standing outside, peacefully protesting in the cold, only 1,200 have been allowed inside the Statehouse. Our sources tell us the Senate Democrats have filed for a court order to get the Republicans to open the Statehouse and a judge is hearing the case now.

Our Teamster brother Daniel Brush led a rally in Montpelier, Vt., where 300 people stood in the frigid cold to show their support for protesters in Wisconsin. Brush is the guy with the flag in the photo below: 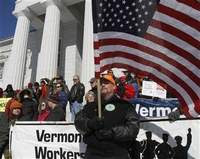