Teamsters hold the line in Madison


﻿ ﻿﻿﻿ ﻿﻿﻿
Members of every Wisconsin Teamster local as well as some from Chicago joined the biggest day of protests yet in Madison. Teamsters came from every corner of Wisconsin, from Racine, Milwaukee, Green Bay, Eau Claire, Mosinee, Duluth and beyond.
Crowd estimates range from 50,000 to 100,000, with Tea Partiers estimated at between 200 and 5,000 (we suspect the 5,000 number is from a Tea Partier). According to Blue Cheddar's online broadcast, the protesters are saying "We're not going anywhere. We're staying until we kill this bill."
The Tea Partiers brought their provocateurs, including Andrew Breitbart (the jerk who tried to smear USDA employee Shirley Sherrod with a heavily edited video that made her sound racist).  Their intent was to bait the protesters into doing something that would look ugly on Fox News. We're quite confident our Teamster brothers kept their cool during this debate with Tea Partiers (see photo). 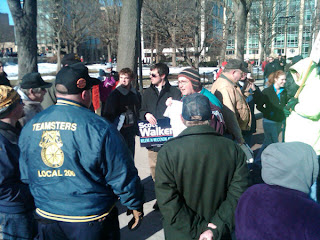 One twitterer pointed out the irony of Tea Partiers wearing their Green Bay Packer gear. The Packers, of course, belong to a union and seven of them issued a statement opposing Gov. Scott Walker's bill to eliminate nearly all collective bargaining rights for government workers. 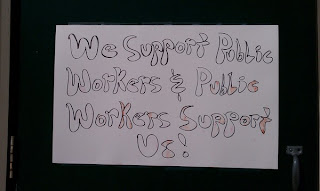 Many in the crowd tweeted their gratitude for the support from the Teamsters and other private sector unions. Local businesses showed their support by posting signs in their windows. Union cab drivers staged a yellow cab parade down the street. And one Manitowoc alderman gave a ride to protesters. Tweeted Matt Kadow,

The Cap Times reports the crowd is civil and peaceful:


Ten people have been ticketed for disorderly conduct, according to Dane County Sheriff Dave Mahoney. That's nine fewer citations than were written at the last Badger home game against Northwestern.
"It's a very upbeat crowd, very friendly," Mahoney said. "There are a lot of children and families up here. That helps keep it civil as well."

A makeshift drum circle has been a near constant for the past several days in the center of the capital rotunda and many protesters Friday were moved to tears when Democratic activist Jesse Jackson arrived, joining with the crowd to sing "We Shall Overcome."

But in a building that is used to accommodating a few hundred workers on a normal day, the swell to upwards of 45,000 is visible. Trash cans on the grounds and inside the building were overflowing with trash. And the appearance of some bathrooms was less than ideal.

Micah Uetricht (@micahuetricht), a reporter for @gapersblock and @campusprogress, is reporting via twitter in Madison today. He spoke to an AFSCME respiratory therapist who said the only reason she gets eight hours off after working 16 is because they won it through collective bargaining.

Uetricht also quoted a great line from a Capitol rally speaker that summarizes Madison in one sentence:


Wisconsin is in the middle of a class war, and we will hold the line.

Below are two awesome signs from two awesome revolutions: one in Egypt (it's being tweeted around Madison and looks authentic) and one from behind the cheese curtain: 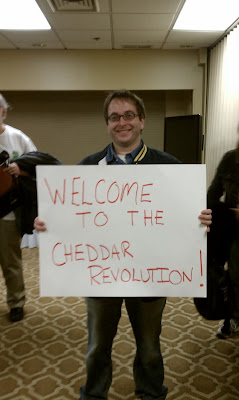 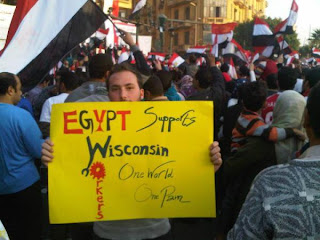