Teamsters take the fight to IN, OH, OR, WA, NV

﻿
﻿﻿﻿
﻿﻿Thousands continued to protest for the eighth day in Madison but some of the action moved to Indianapolis today, where 7,000 workers showed up to protest a right-to-work (for LESS) bill that was voted out of committee.

Teamsters were there in force, their red-and-blue "Stop the War on Workers" signs extremely visible.

The IndyStar included an awesome photo gallery with several great photos of our members. One photo (can't use because it's copyrighted) shows our brother James Taylor, a truck driver with Local 135, sitting outside the committee room with the sign. Here are a couple more photos from Indiana: 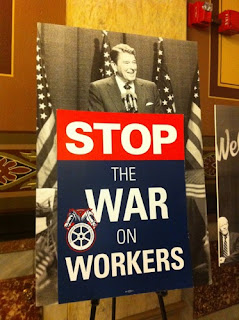 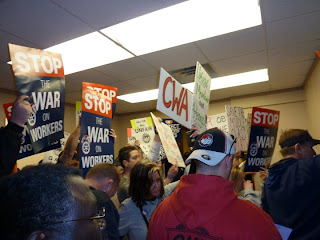 In Washington state, Teamsters Local 117 sang the Wisconsin fight song at a noon rally in the capitol. They'd carpooled from Tukwila to Olympia. KIRO-TV reported


Hundreds attended a rally in Olympia on Monday for the dual purposes of supporting state workers in Wisconsin and trying to save public services from the chopping block here in Washington. 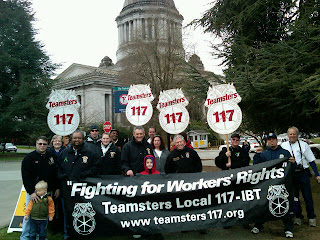 
It is important that the rights we possess in Washington State are not taken for granted. If the political landscape in our State were to alter slightly, the kinds of radical legislative changes now being imposed on working families in Wisconsin will almost certainly happen here. 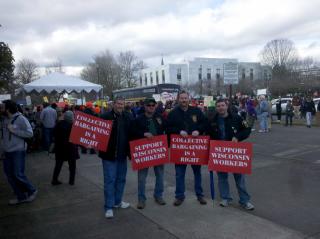 Teamsters from Local 324 in Salem, Ore., brought "Collective Bargaining Is a Right" signs to a Capitol rally where hundreds of workers showed up.

Two thousand workers, including Teamsters from Local 631, came to a rally in Las Vegas today to show solidarity with Wisconsin workers. Teamsters joined another 300 in Carson City. (Photos to come.)

Many of our Ohio brothers and sisters will join a massive Wisconsin-like rally at Ohio’s statehouse in Columbus Tuesday to protest Senate Bill 5, which would abolish collective bargaining rights of state employees. According to the Dayton Business Journal


The mobilization is expected to be much larger than last Thursday’s turnout, where an estimated 4,000 people filled the statehouse atrium, rotunda and West Lawn to oppose the measure, according to a news release from the AFL-CIO. Among its other provisions, Senate Bill 5 requires workers to pay more toward health insurance premiums and switch to a merit-based pay system.

And finally, our favorite tweet of the day (about Wisconsin Koch whore Gov. Scott Walker:


@BrianKeljore   So Egyptians, the Packers, NFL Player's union, teamsters, firefighters, police, and Obama are against him and he still is being a child.

Posted by Teamster Power at 5:58 PM