Teamsters trek to Madison for Day 5

Teamsters are heading back to Madison today as the billionaire Koch brothers pay for a counter-demonstration by Tea Partiers.

Teamsters Local 344 in Milwauke posted a tremendous video of Friday's rally inside the Rotunda. Watch it here. You'll be blown away by the spirited crowd blowing horns, beating drums, waving signs and chanting, "This is what/Democracy looks like."

Bill Carroll, our brother from Local 344, tells the camera,


This is America. You've got to fight for your freedom, brother.

And our brother behind the camera says,


Does anybody see any violence or misbehavior? When this goes on the Internet, let the whole world know this is a peaceful protest with a lot of spirit.

The total crowd yesterday was estimated at 40,000. Local 344 is headed back today (we're sure other Teamster locals are going, too, but we haven't heard from them yet).  They posted this urgent message on their Facebook page:

Working people from all over the country are showing their support. Writes Workin Guy on the Teamsters new "Stop the War on Workers" Facebook page,


I hope this weekend brings 10's of thousands from around the country to Wisconsin. Wish it wasn't 2000 miles away or would come over and protest and I'm not even Union but stand by their cause. Repubes will do anything and everything to turn workers into SERFS. I hope to hell you Wisconites impeach Governor Mubarak.

Workers held solidarity rallies in Albany, N.Y., and Sacramento, Calif., yesterday as the voice of dissent is building to a roar.

On Monday alone, we expect rallies Helena, Mont., Las Vegas, Carson City, Nev., Raleigh, N.C., Salem, Ore., Olympia, Wash., and, of course, Madison, Wisc. Teamsters will also be at a press conference in Lansing, Mich. These are just the events we know about, and there will be more on Tuesday. We're trying to provide as much up-to-date information as we can about these events on the IBT's "Stop the War on Workers" web page (along with news, photos and resources like fliers and fact sheets).

Tea Partiers are showing up at these rallies too, compliments of the reactionary billionaire Koch brothers who gave generously to Scott Walker's campaign for Wisconsin governor.  Think Progress reported yesterday,


...the greatest ally to Walker is the dirty energy company Koch Industries. In response to the growing protests in Madison, Koch fronts are busing in Tea Party protesters to support Walker and his union-busting campaign. Last night, MSNBC’s Ed Schultz reported on the involvement of Club for Growth and the Koch-financed Americans for Prosperity in the pro-Walker protest scheduled tomorrow.

They'll be hoping to provoke workers into unseemly behavior and then send the video to Fox News. Let's hope their rally is as pathetic as the one in Ohio earlier this week.

And there's a little bit of good news from Wisconsin. The Democratic senators who left the state, preventing a quorum and a vote on the union-busting budget bill, could stay away for weeks, reports the Associated Press:


The 14 Senate Democrats left the state Thursday, delaying action in that chamber on a sweeping anti-union bill. Sen. Jon Erpenbach, who was among those who fled, said Friday that the group was prepared to be away for weeks, although he would like the standoff to end as soon as possible.

“That really, truly is up to the governor,” he told The Associated Press in an interview Friday at a Chicago hotel. “It’s his responsibility to bring the state together. The state is not unified. It is totally torn part.”

One of the senators, Dave Hansen, is a former Teamster who belonged to Local 662. He issued this statement:


Today teachers, nurses, child care workers, prison guards and other public employees agreed to pay a greater share of their pension and health insurance to help resolve the state's budget issues. As we have said throughout this week, the issue is not a financial one, but a matter of principle: that is to protect the rights of Wisconsin workers.

Governor Walker and legislative Republicans have sought to pass an unprecedented assault on 50 years of collective bargaining rights for Wisconsin workers in less than five days. Deciding to declare the polka the state dance received more legislative consideration than this 144 page bill that would turn back the clock on decades of hard fought protections for Wisconsin families.

It is time for Governor Walker and legislative Republicans to remove all language related to collective bargaining from this bill and return the bill's focus to their stated concern for the state's finances.

Finally, here are a few more photos from our brothers and sisters at Local 344. 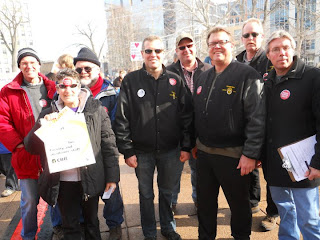 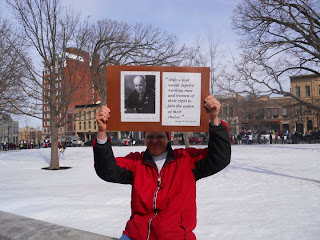 Posted by Teamster Power at 7:53 AM