5K at Wisco rally; "one of biggest ever" 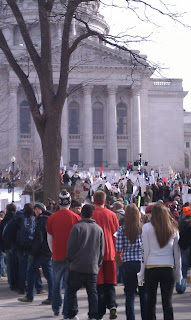 There are an estimated 5,000 10,000 people at the Statehouse rally. A thousand of them signed up to speak at a hearing on the heinous plan. Cheers went up when the red-white-and-blue Teamsters trucks showed up.


More than 10,000 protesters crowded the southwest side of the Capitol building, many of them carrying signs and chanting “recall Walker.” Meanwhile, inside, thousands crowded the rotunda and watched TVs set up to broadcast the public hearing scheduled to discuss the governor’s proposal.

@MelissaRyan: Most focused lefty rally I've ever been to, everyone on msg. Big crowd still occupying capitol.

@kochea7: And the eastern exit towards state street is absolutely packed. One can hardly move in the hallway.

@JacquelynGill: Firefighters, tho exempt from the bill have shown up from to support us! 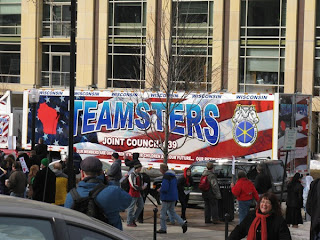 @lafalkenstein: big cheers when Teamsters pulled up on Cap Square

@efremj: It's absolutely electric out here at the Capitol.

@christipiglet: I love the people in the Capitol building windows cheering! Brings tears to my eyes

In the Capitol Rotunda, the huge crowd waved placards to protest Walker's plan for gutting public employees' collective bargaining rights and making them pay more for their benefits.


Even with tensions running high since Walker announced his proposal last week, the protesters were remarkably well behaved. Their signs were reasonable, too. "Respectfully disagree, Scott," said one. "Stop, collaborate, listen," said another. Walker had mentioned putting the National Guard on alert in case of labor unrest, but it's hard to imagine cracking heads over such a sensible response from public employees.

The throng in the Rotunda watched the hearing on video screens and signed blue slips to get their names in the queue to speak. Mike Huebsch, secretary of the Department of Administration, opened the proceedings with a bloodless recitation of the budget bill's virtues from Walker's point of view. That didn't go over well with the crowd, who booed Huebsch's repeated calls for "a return to the fundamental principles of frugality."

A dreadlocked women standing next to me snorted at Huebsch's slogans. She was Michelle Dickinson of the UW Extension. "As a single mom, I can't afford the 10% pay cut," she told me. "I'm going to have to go into foreclosure."