﻿ ﻿ Reports are starting to come in from our Teamster brothers and sisters at rallies all over the country. So many, in fact, we're having a hard time keeping up.

At Ground Zero (Madison), it's 15 degrees and snowing but the rally is huge. The tweet traffic says there are 100,000 people (that may be a little high).  The crowd is the largest yet, we're told by Steven Nelson, our brother from Teamsters Local 200. Reports Nelson:


The inside of the Capital is so full we can't get in! This is fantastic.

If they'd gotten in, they would have seen police joining the protest with a huge Teamster banner hanging from a balcony in the Rotunda. Local 200 represents police officers from Bayside. They had new signs made for today's rally that say "1.4 million Teamsters Support Public Sector Unions."

Local 769 in Miami came out in force to a demonstration on Biscayne Blvd. We have a tweet and a twitpic from the rally. The tweet:


Out on Biscayne Blvd. Showing the colors at this excellent rally in Miami!


HUGE SUCCESS IN NEBRASKA. UNION CROWD MARCHED TO TEA PARTY COUNTERPROTEST AND DROWNED IT OUT!

In Helena, Mont., we're seeing a crowd with signs that say "End Cuts, Tax Corporate Profits." There are a thousand people in Denver and the crowd is growing. 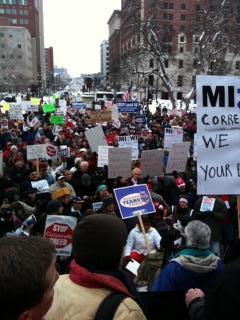 We're hearing a thousand people are in Lansing, Mich. Another thousand in front of the Boston Statehouse, where we see signs, "Cut Bonuses, Not Teachers."  (There was another rally in Boston to protest Bank of America's failure to pay its fair share of taxes. One twitterer claims to have hugged a police officer in front of the bank.)

Another 3,000 marched peacefully in Washington D.C. Rally Girl promises a report (and pictures) soon. "You say cutbacks, we say fight back"


People are coming out in droves to Olympia,

richmond rally was great. great vibe and fantastic speakers. There IS POWER IN A UNION.

Here's a cool tweet: Poland’s Solidarity Tells Wisconsin: Your Victory is Our Victory as Well


In a remarkable expression of international solidarity among working men and women, the president of Solidarność (Solidarity) – the Polish trade union whose determination and courage led to the fall of the Iron Curtain – has written an open letter in support of the public employees of Wisconsin. Piotr Duda, president of Solidarność, said the 700,000 members of the Polish union wished “to express our solidarity and support for your struggle against the recent assault on trade unions and trade union rights unleashed by Governor Scott Walker.”

Way more to come.
Posted by Teamster Power at 3:06 PM