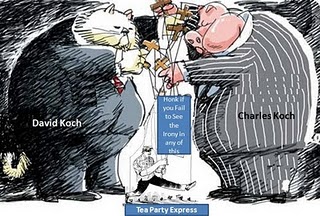 We were especially amused by Koch whore Wisconsin Gov. Scott Walker's description of a recent New York Times story. It was about a "union man" who agreed with Walker's plan to strip government workers of collective bargaining rights. Walker, speaking to a man he thought was David Koch,  praised the story as "objective" journalism because, well, it wasn't objective. (We're presuming Walker is too dumb to know what "objective" journalism is.)

We don't exactly revere the New York Times here at TeamsterNation. Its reporting is often sloppy and biased against unions. (Though we do revere Times columnist Bob Herbert and some Times reporters are good.) Recently a not-so-good Times reporter wrote a hideous story about Mexican trucks in which he managed to contact many people in favor of opening the border. Somehow he couldn't find a single Teamster (there are 1.4 million of us) to present an opposing view. The Times refused to print a letter of complaint to the editor from Jim Hoffa, though they did condescend to correct the most glaring factual error.

Which brings us to the latest Times' howler: Turns out the "union man" who supported Scott Walker wasn't a union guy at all. The Times' reporters didn't even spell his name right. This was not a minor error, as "Ric Hahn" was central to the story's premise that a "simmering resentment" over lost jobs is the reason Wisconsin "has set off a debate that is spreading to other states over public workers, unions and budget woes."

The real reason Wisconsin set off the debate was because groups funded by the Koch brothers and other reactionary billionaires financed his political campaign, and Walker needed to pay back his political patrons. That, of course, didn't make it into the newspaper.

It's truly poetic justice that the Times' anti-union bias and gullibility was praised by an anti-union and gullible politician, and that both were ultimately exposed. Did they learn their lesson? Of course not.  But it feels good to read the Times' correction. See below:


A front-page article on Tuesday about reaction among private-sector workers in Wisconsin to Gov. Scott Walker’s effort to cut benefits and collective-bargaining rights for unionized public employees referred incorrectly to the work history of one person quoted, and also misspelled his surname. While the man, Rich Hahn (not Hahan) described himself to a reporter as a "union guy," he now says that he has worked at unionized factories, but was not himself a union member. (The Times contacted Mr. Hahn again to review his background after a United Auto Workers official said the union had no record of his membership.) (Go to Article)

Posted by Teamster Power at 7:09 AM