Fla congressman tries to make it harder for rail, airline workers to organize 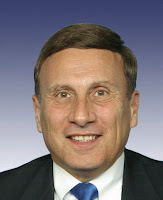 You may know John Mica from The Colbert Report, where the Florida congressman was asked if TSA screeners made him take off his toupee when he went through airport security.

Mica is now chairman of the House Transportation and Infrastructure Committee. He is no friend to working families. What he's doing to FAA reauthorization, for example, isn't pretty. He's taking the Express Carrier Employee Protection Act out of the bill (that's the one that would return FedEx to the same labor law that govern all other package delivery companies). He's also trying to reverse a National Mediation Board rule change that allowed a union to be recognized if a simple majority of workers who cast ballots approved.

According to CQ today,


Mica’s bill also would nullify a National Mediation Board rule that went into effect in June. The rule changed the way ballots are counted in union elections. The NMB supervises union negotiations for the airline and rail industries governed by the Railway Labor Act.

Currently, union elections in those industries are determined by a majority vote of all employees. Those who do not cast votes are counted as voting “no.” The NMB change instead let the outcome of elections be determined by the majority of votes cast.

The change makes it easier to organize; in fact, Atlantic Southeast Airlines mechanics who wanted to join the Teamsters were the first to file for election under the new rule and the first to win union representation under it.
The bill will be discussed in committee on Wednesday. Stay tuned.
Posted by Teamster Power at 1:28 PM