﻿﻿﻿ ﻿﻿﻿Rally girl brings us another report from downtown Wilmington, Del., where more than 100 workers gave up their lunch hour on Wednesday to show their solidarity for workers in Wisconsin.
Len McCartney from Teamsters Local 326 in New Castle was there protesting Koch whore Wisconsin Gov. Scott Walker's plan to destroy workers' rights. McCartney said Walker’s proposal is an attack on all workers, regardless of where they live.


If workers in Wisconsin don’t win this battle, we’re all going to be in trouble. I want Wisconsin workers to know that Teamsters in Delaware are standing with them in solidarity.

Teamsters today are gearing up for dozens more rallies over the next few days. Tomorrow we're expecting Teamsters at big rallies in Trenton, N.J., and Spokane, Wash.

Below are a couple of fresh photos from a rally in Las Vegas a few days ago. 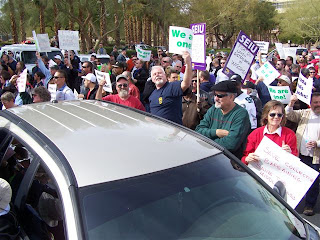 Posted by Teamster Power at 5:52 PM