Wisco Teamsters take to the streets 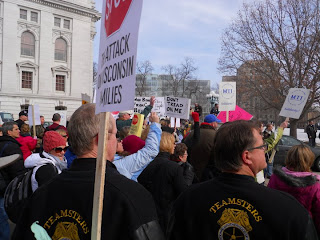 Our Teamster brothers and sisters behind the cheese curtain have been in the thick of things. Brother Tom Bennett, president of Local 200 in Milwaukee, tells us hundreds of Teamsters from his local have driven to Madison every day. They've been inside the Rotunda and outside the building.  "I'm telling all my members to make the trek to Madison," he said.


The Capital was packed today inside and out. We had our semi there and the crowd went crazy when they saw it pull up.


For the second afternoon in a row, the Brown County courthouse was the backdrop for a protest against the state budget repair bill...They received a permit late Thursday to park a semi on Jefferson Street.

About 100 union members took part in the protest.
Local 662's Eau Claire office also got 200 people on short notice to protest Gov. Scott Walker on Tuesday. He was visiting McDonough Manufacturing, but got a surprise before he made it to the plant. Reports WEAU,

“I'm here today to support my brothers and sisters in the labor movement that includes those who are teaching as I am a retired teacher,” Tom Zahorik tells us amid anti-Walker chants.

Protesters Tuesday say they feel like their voices have been ignored, they all asked Governor Walker to sit down with union and public workers and discuss the issue together.

“We just want to be here to support all those people and say this is wrong and we just want the Governor to talk to us and that's one thing he hasn't been willing to do so far,” Joseph Kearney a Chippewa Valley Treatment Facility worker tells us.

Local 344 from Milwaukee has also been part of the swelling crowds in Madison. They're doing a great job updating everybody on ther Facebook page. Here's their most recent message:

The Dems have bought us some time. We all have the opportunity to continue to lobby our legislators relentlessly and we urge you to do so. Contact info can be found on our website: www.local344.org. Officers and Business Agents of this Local Union will once again be in Madison tomorrow to join the ever increasing throng of people who are opposed to this bill! If you're available, join us! Pictures and video soon!

And a few pictures of the Teamsters presence in Madison. More to come! 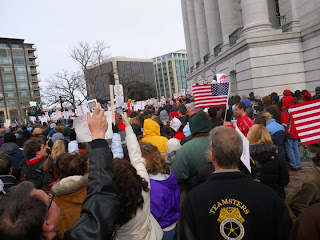 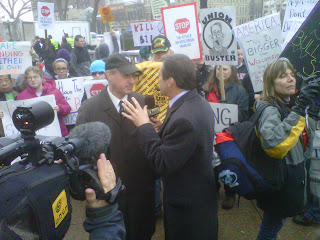