Teamsters join swelling protests in IN, WI, OR, NV

﻿ ﻿
As the protest continued today in Wisconsin, Teamsters joined a crowd of 7,000 in Indianapolis to protest a right-to-work (for LESS) bill expected to pass out of committee today. indystar.com reports


The thousands of union supporters that packed the Statehouse this morning and spilled out onto Downtown sidewalks hoped their show of solidarity would be enough to dilute legislative support of a proposed right to work bill.

Ohio Teamsters prepared for a massive rally tomorrow at the Statehouse in Columbus. Forums and rallies were held today in other Ohio cities, including Dayton, Toledo, Youngstown and Cincinnati.

In Wisconsin, Green Bay got more than a foot of snow last night, so Teamsters from Local 662 were stuck up north today. Teamsters from Milwaukee locals 200 and 344, closer to Madison, were expected to be at today's protest.

Brother Danny McGowan from Local 662 tells us the Minnesota Teamsters will bring down their semi tomorrow, so there'll be two parked across from the capitol. We're hoping for a big Teamster presence in Madison on Tuesday and Wednesday, so those would be the days for out-of-state locals to head for Wisconsin. The Teamsters will gather at about 10 o'clock.

Brother Rick Smith from Harrisburg, Penn., is in Madison today looking for space to broadcast his radio show from. He writes on his Facebook page,


Everyone here has been ULTRA helpful! But at the same time revolutions tend to lack space... 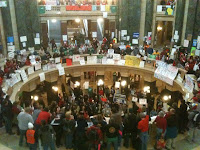 Here's a photo Smith just took of the protesters singing the Star-Spangled  Rotunda.

McGowan said the Teamsters' presence sends a message that the protests aren't just about government workers -- they're about all workers (even though the Teamsters do represent public sector workers such as corrections officers and truck drivers). Said McGowan


The demonstrations at the state Capitol entered their second week Monday morning to the pounding of drums in the rotunda.
With Madison covered in ice from Sunday's winter storm, the crowd in the statehouse was smaller at 9 a.m. than it had been in protests last week. But Madison schools are shut down for another day Monday and many state workers also have a previously scheduled furlough - leaving many public workers with the chance to head to the isthmus.

Add in a rally scheduled for noon and a concert at 5 p.m., and protesters seeking to keep their momentum from last week could still turn out a large crowd.

Sister Fran Almarez, business agent for Local 631, is telling members to watch out for Tea Partiers today at rallies in Las Vegas and Carson City. Local 324 will be participating in a noon rally today in Salem, Ore.

More updates to come.
Posted by Teamster Power at 1:30 PM