An estimated 16,000 protesters are right now marching, singing, cheering, tweeting and chanting inside and outside the Wisconsin Statehouse in a powerful show of opposition to Gov. Scott Walker's insane budget bill. The bill is being heard in a committee room where the thunderous roar of the crowd can be heard outside. The video above is just a taste of what's happening now. Link to this video here to get a better sense of the size and energy of this crowd.

We're following day two of the amazing protests in Wisconsin via twitter. We learned that inside the Rotunda, high school students led the crowd in the National Anthem. 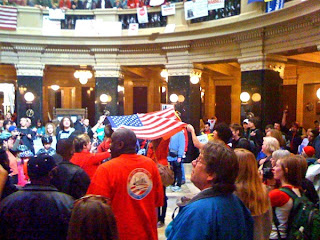 
OFA_WI "This land was made for you and me" the crowd sings with an impromptu band of banjos and drums inside the capitol.#killthebill #wiunion

Outside, the crowd is enormous, estimated at 25,000, nearly double yesterday's. AFSCME President Gerald McEntee gave a rousing speech, followed by the crowd singing "We're not gonna take it." Firefighters, who are exempt from the budget's union-busting provisions, draw huge cheers whenever they show up. 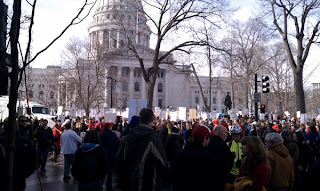 @SeleneMSC  Full hearing room. We can hear the thunderous roar of protesters in the rotunda! http://plixi.com/p/77879392 #notmyWI #WIunion

@MelissaRyan  The one thing I hope people not in Madison can comprehend is just how large the crowds are. Double yesterday's and growing. #notmyWI 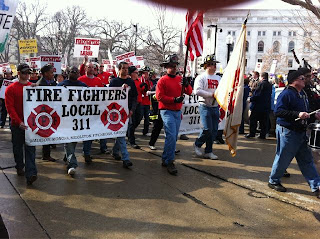 Posted by Teamster Power at 3:26 PM