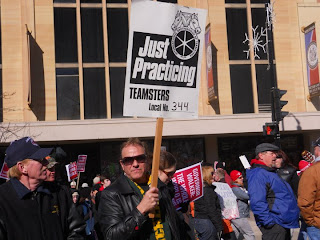 Teamsters from all over the country drove to Madison to hold the line in the war against the middle class on Saturday. It was the biggest protest yet. Brother Steven Nelson from Local 200 said the crowd is estimated at 70,000, of which only about a thousand were from the Tea Party.

We understand the Tea Partiers didn't try to provoke the Teamsters. According to a twitterer, @SAndrewDKos:


You shoulda seen the tea buggers shut up & look inconspicuous whenever teamsters or pipe-fitters walked by.

UPDATE: Local 344 posted a short video of the protest inside the Rotunda on its Facebook page. Amid the din, one of our brothers tells the camera:


You're now seeing the most sacred of all rights in a democracty: dissesnt. Isn't it a beautiful thing? The working people of this state are coming back to life again. It's high time. It's happeneing and it's happening now.

Our brothers and sisters vow to carry on until lawmakers kill the bill to eliminate collective bargaining rights, even as rallies and vigils are being planned in nearly every state in the country for Monday and Tuesday. As our favorite sign in Madison said, "Just Practicing."

Union member parades into the Rotunda were led by firefighters, who were exempt from Koch whore Gov. Scott Walker's bill. (UPATE: Watch this incredible video of the parade here.) Mahlon Mitchell, president of the Professional Firefighters of Wisconsin said,


Day after day, I saw the crowds swell as people arrived on buses from across the state and even across the country. I saw feeder marches of 5,000 high school students chanting with an unguarded, proud fury you’d never know today’s teenagers possessed. I saw people dressed like King Tut with a banner saying they would “protest like Egyptians.” I spoke to nurses choking with rage that they would have to take second jobs or go onto food stamps if business as usual took place in the Capitol Building. I saw thousands sing the Wisconsin Badger football fight song, ending with “Fight Fight Fight and We’ll WIN THE DAY!” and they weren’t talking about football.

The Wisconsin 14 -- Democratic state senators who left the state rather than vote on the bill -- stayed away.  One of them, Dave Hansen, is a former Teamster from Local 662. His old local was out in force: 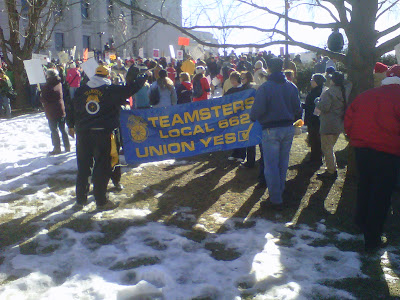 Here are a few more photos, thanks to Locals 344 and 200. You can see more on the "Stop the War on Workers" web page. 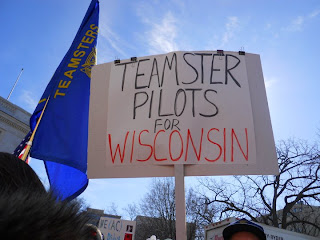 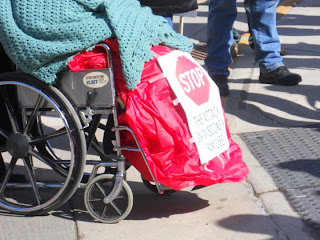 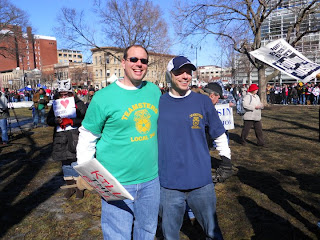 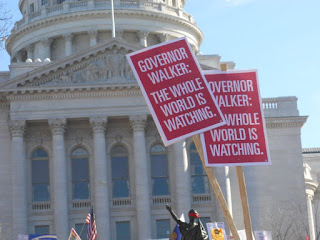 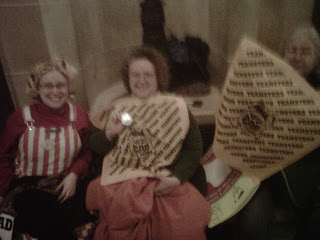 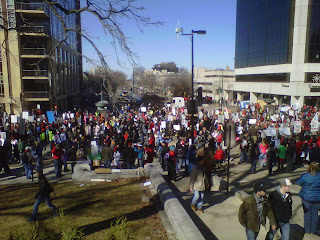 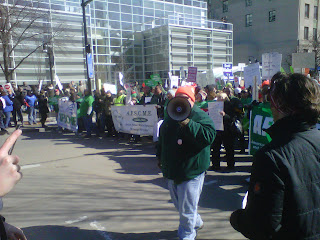 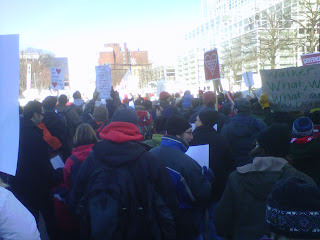 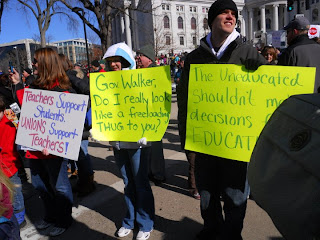 Posted by Teamster Power at 8:07 AM