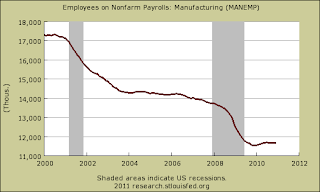 More jobs were lost in the U.S. because of offshoring manufacturing than because of the housing bust or the financial meltdown, the Economic Populist concludes.

Here are the numbers:
By comparison, there are 920,000 people in China making iPhones, iPads and iPods. (Apple has 46,000 employees around the world.)

Guess who else is getting screwed by outsourcing? Information workers -- IT and software programming jobs. The U.S. has lost a million of those since peak employment in March 2001. Economic Populist points out that a lot of information jobs are displaced by H1B visas, so he puts the actual loss of U.S. information jobs at 1.7 million.

It's a great post. Read the whole thing here.
Posted by Teamster Power at 10:35 AM