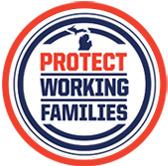 This is great news! The constitutional amendment to protect collective bargaining rights in Michigan will be on the ballot in November.

We won the court battle; now we have to win the ballot question.

Here is MLive on the latest development:


Michigan could follow Ohio and Wisconsin as a nationally watched battleground for unions looking to restore clout after the state Supreme Court ruled that “Protect Our Jobs” proposal will be before the voters in November.

Unions have collected millions of dollars to campaign for the proposal, which would enshrine collective bargaining into the state constitution, and possibly affect about 170 existing laws.

“I would say that Michigan will become a major battleground, like Wisconsin, on this Nov. 6,” said Bill Ballenger of Inside Michigan Politics.

“The unions spent millions just getting this on the ballot. They’re trying to head off anything that might be coming from a Republican-controlled Legislature and Gov. Snyder, fearing they could enact ‘right to work’ legislation that would be the coup de grace for organized labor in Michigan.”


The Protect Our Jobs proposal is backed by national union leaders, and was discussed by Teamsters President James Hoffa as he addressed the Michigan delegation at the Democratic National Convention on Tuesday.

At a morning breakfast Hoffa talked about re-electing Barack Obama and retaking the state House -- but said passing the constitutional amendment “is the most important thing.”

“We need to guarantee collective bargaining in Michigan forever in our constitution,” he said to applause.

Posted by Teamster Power at 6:35 PM