Romney demanded, and got, a $10M government bailout 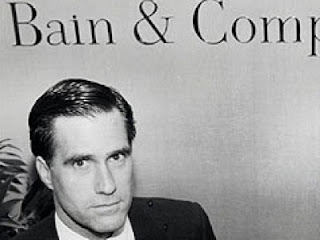 Mitt Romney extracted a $10 million bailout from the federal government for a floundering consulting firm, but still doesn't think much of people who depend on the government.

Rolling Stone reported the story late last month. Short version: Bain & Co.was defaulting on its debt after its founders looted its treasury. Romney took a leave of absence from Bain Capital to rescue Bain & Co., his former employer. He got loans from four banks to repay Bain & Co.'s debts.

The Federal Deposit Insurance Corporation had to sign off on the deal because it controlled one of the banks that Bain owed money to. The FDIC also allowed a loophole in the deal. It said Bain could give its cash to Bain's officers before paying off its debt.

(How did that happen? Well, Bill Seidman was then chairman of the FDIC and former finance chairman to Romney's father's presidential campaign in 1968. Can you say "crony capitalist"?)

Rolling Stone reports Romney decided to let the government bail out the company. He threatened to loot Bain & Co. by handing out bonuses to officers if the FDIC didn't forgive $10 million in Bain's debt. Writes Rolling Stone:


The FDIC agreed to accept nearly $5 million in cash to retire $15 million in Bain's debt – an immediate government bailout of $10 million.

Even The Economist -- hardly a left-wing propaganda organ -- concluded the evidence shows Romney extorted a $10 million bailout from the Federal Deposit Insurance Corporation. (The FDIC, by the way, is in the business of shoring up banks, not consulting firms like Bain & Co.)  The Economist reports Romney has some 'splaining to do:


If Bain & Company was just such a "loser" with too big an appetite, and got a handout to keep its loans above water, Mr Romney has some awkward explaining to do. And "it was perfectly legal" will not do the trick. "Legal but stomach-turning" is all too common in American finance these days. Mitt Romney can ill afford to be more closely associated with dealings like that.

Posted by Teamster Power at 1:19 PM