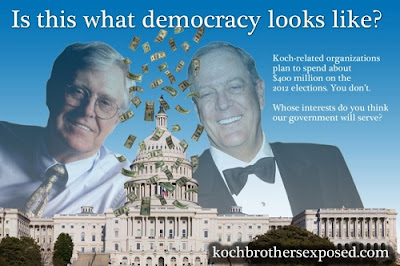 If California's Prop 32 is supposed to take money out of politics, why are the Koch brothers supporting it? They're the poster boys for the corporate takeover of our democracy.

Short answer: Prop 32 is about taking union money out of politics. That's why they call it the "Billionaires' Bill of Rights."

Here are the deets: The LA Times reported,


A group with ties to the conservative billionaire Koch brothers has dropped $4 million to pass a ballot measure that would severely limit the political activity of labor unions.

The new committee has just one donation -- $4 million from the American Future Fund, a conservative nonprofit organization whose stated mission is to promote “conservative and free-market principles...”  (Ed. note: Yeah, free for corporations, not so much for ordinary citizens.)...

No on 32 spokesman Brian Browkaw said the donation illustrated that the initiative would hurt unions while leaving corporate influence in tact. "The very same corporate special interests who carefully exempted themselves from Prop 32 and who stand to benefit from its passage – Big Oil, billionaire businessmen and the Super PACs linked to the Koch Brothers and Karl Rove – are now spending millions to pass Prop 32 and advance their interests at the expense of everyday Californians," he said .]

The donation comes as new polls show support for Proposition 32 slipping from its original highs of more than 60% support among likely voters. Proponents say it would limit political activities of corporations and labor unions, but its opponents, led by the state’s largest worker groups, say it is aimed at tempering unions’ political influence while leaving wide loopholes for corporations to funnel millions into state campaigns.

And here's a message from the LA County Fed:


It’s time to re-double our efforts on the phones. We know it requires having conversations with voters for us to defeat Prop. 32. Download this flyer for volunteer phonebank information.

If your union can turnout at least 10 people to make calls, we will bring the phonebank to you!