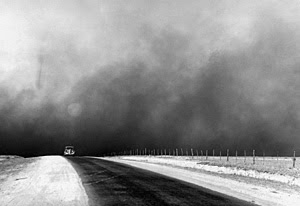 The worst drought since the Dust Bowl has harmed crops from corn to soybeans to Christmas trees.  The severe weather has even taken a toll on the monarch butterfly population and the availability of movie popcorn.

It may also cause food riots, according to a post from the Motherboard blog:


What’s the number one reason we riot? The plausible, justifiable motivations of trampled-upon humanfolk to fight back are many—poverty, oppression, disenfranchisement, etc—but the big one is more primal than any of the above. It’s hunger, plain and simple. If there’s a single factor that reliably sparks social unrest, it’s food becoming too scarce or too expensive. So argues a group of complex systems theorists in Cambridge, and it makes sense.

In a 2011 paper, researchers at the Complex Systems Institute unveiled a model that accurately explained why the waves of unrest that swept the world in 2008 and 2011 crashed when they did. The number one determinant was soaring food prices. Their model identified a precise threshold for global food prices that, if breached, would lead to worldwide unrest.

The MIT Technology Review explains how CSI’s model works: “The evidence comes from two sources. The first is data gathered by the United Nations that plots the price of food against time, the so-called food price index of the Food and Agriculture Organisation of the UN. The second is the date of riots around the world, whatever their cause.” Plot the data, and it looks like this: 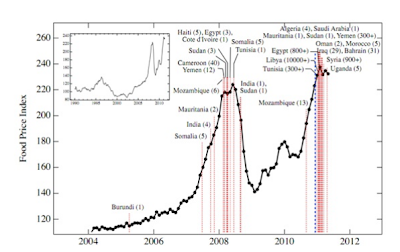 Pretty simple. Black dots are the food prices, red lines are the riots. In other words, whenever the UN’s food price index, which measures the monthly change in the price of a basket of food commodities, climbs above 210, the conditions ripen for social unrest around the world.

Business Recorder reports food prices are high because of droughts in the U.S. and Eastern Europe:


From US to Ukraine, dry weather and draught have battered crops hard, and the resulting price spikes are battering the poor. World Bank, in its latest Food Price Watch, has reported a 10 percent month on month rise in July 2012 due to severe climate in Eastern Europe and United Sates. Food prices have remained volatile for a while, and the weather associated risk premium is the critical factor behind the food prices uncertainty and escalation.

Pray for rain.
Posted by Teamster Power at 3:02 PM