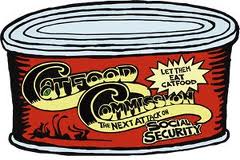 The peerless Dean Baker tells us who the real government freeloaders are after the secret Romney video became public.

(If you're late to the party, Romney told his rich friends:


There are 47 percent of the people who will vote for the president no matter what. All right, there are 47 percent who are with him, who are dependent upon government, who believe that they are victims, who believe the government has a responsibility to care for them, who believe that they are entitled to health care, to food, to housing, to you-name-it. That that's an entitlement. And the government should give it to them. And they will vote for this president no matter what…These are people who pay no income tax.)

One of the chief proponents of cutting Medicare and Social Security benefits is Erskine Bowles, co-chairman of the Catfood Commission National Commission on Fiscal Responsibility and Reform. Baker calls him out as the poster child for people who get hundreds of thousands of dollars a year for sitting on a corporate board for which they did little obvious work.


Mr. Bowles has earned millions of dollars sitting on corporate boards over the last decade. The stock prices of the companies on whose boards he sat have mostly plummeted. Since 2003 the Erskine Bowles stock index has lost more than one third of its value. By comparison, the S&P 500 has risen by more than 50 percent. If Mr. Bowles was trying to serve shareholders, he has not done a very good job.

If people think that this is a private matter, with Mr. Bowles just ripping off shareholders while Governor Romney's freeloaders are ripping off taxpayers, think again. One of the companies on whose board Mr. Bowles sat, General Motors, went bankrupt with substantial costs to the government. Another, Morgan Stanley, would have gone bankrupt without extraordinary assistance from the Fed and Treasury, which continues to this day in the form of implicit too big to fail insurance.

So if we want to have a debate about people who freeload on the rest of the country, we should have folks like Erskine Bowles at center stage. Of course he is in a much higher income bracket than the folks who get Social Security or unemployment insurance from the government, but that fact should not be allowed to color the debate.

Touche.
Posted by Teamster Power at 9:44 AM