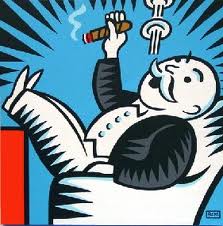 No doubt you heard by now of the secret video in which Romney dumped on nearly half of U.S. citizens because they didn't pay income taxes during the Great Recession. (Note: They paid plenty of other taxes.)

Sun Capital threw tens of thousands of employees out of work, endangered lives, and fobbed its pension obligations onto the federal government.

Quick history: Sun Capital Partners in 2006 formed Emerald Performance Materials, a chemical company, after a series of acquisitions. The workers at Emerald's plant in Henry, Ill., then joined the Teamsters because they believed Sun Capital's cost-cutting was dangerous. Safety standards had eroded, a worry for workers who handle such toxic chemicals as sulfuric acid, formaldehyde, methyl cyanide and caustic soda.


...management locked out 42 workers on March 27, 2011, leaving them with no jobs and no health insurance for nearly six months. The workforce was locked out after they rejected daunting and unsustainable cuts coupled with continued degradation of health and safety conditions, including a 30-percent cut in average pay, slashed vacation and overtime pay, outsourcing of the quality control lab, and elimination of the health and safety operator position.

Memo to Mitt Romney: Locking people out of their jobs makes it less likely they'll be paying income tax.

But more about Marc Leder's despicable business practices at Sun Capital:
Balloon Juice reminds us of Sun dumping pension obligations on the government, from a New York Times story earlier this year.


Among the losers was Friendly’s, the restaurant chain known for its Jim Dandy sundaes and Fribble shakes...

FOR more than 28 years, Helen Smolak worked at the Friendly’s in Denham, Mass. Day in and day out, she served Big Beef Burgers and Fribbles, collected tips and made a decent living.

All that changed one evening last October. That was when Ms. Smolak’s supervisor called to tell her the restaurant was shutting down — immediately.

“It was my family. That was my home,” said Ms. Smolak, 56. “Friendly’s always came first. I was supposed to retire with these people and with this company.”

The Pension Benefit Guaranty Corporation, the federal agency that helps safeguard corporate pensions, wasn’t so sure. It accused Sun Capital in bankruptcy court filings of using the bankruptcy to shift Friendly’s pension burden onto the agency.

Another Sun Capital affiliate then bought Friendly's mere months after it had offloaded its pension obligations onto the taxpayer. Dean Baker writes,


...in an unusual move, PBGC accused Sun Capital of fraud and announced that it will fight Sun Capital's attempt to stick US taxpayers with the bill. PBGC objects to what appears to be a transparent effort by Sun Capital to take advantage of the bankruptcy process to abandon pension obligations while continuing to keep its ownership of Friendly's.

And about those parties ... the New York Post reported,


It was as if the Playboy Mansion met the East End at a wild party at private-equity titan Marc Leder's Bridgehampton estate, where guests cavorted nude in the pool and performed sex acts, scantily dressed Russians danced on platforms and men twirled lit torches to a booming techno beat.

The divorced Sun Capital Partners honcho rented a sprawling beachfront mansion on Surf Side Road for $500,000 for the month of July. Leder's weekly Friday and Saturday night parties have become the talk of the Hamptons -- and he ended them in style last weekend with his wildest bash yet...

...the revelry hit a frenzied point the next day before midnight when a male guest described as a "chubby white meathead" and a "tanned" female guest stripped and hopped into the pool naked.

"The guy hopped in first in his briefs and the girl standing on the perimeter of the pool took her top off," a witness said. "The next thing you know, her bra is off. Then she took her bottom off and was butt-naked and jumped in the pool."

Another attendee said, "They were in the pool swimming together. Then they started making out." Multiple witnesses say the naked pair continued their show outside the pool and performed sex acts on a chair in front of astonished guests.

None of this sounds elegant to us.

Posted by Teamster Power at 2:51 PM