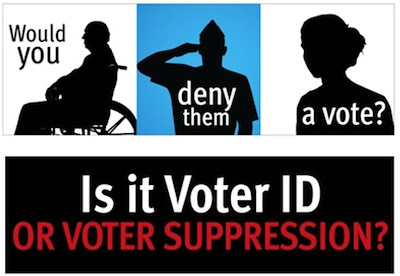 New Hampshire’s new voter ID law was given a dry run in Tuesday’s primary, and clearly plenty of people in the Monadnock Region are not happy about it. It was the law’s dress rehearsal, the only chance to take it out for a spin before it kicks in for real in the general election Nov. 6.

Judging by local reaction in Tuesday’s primary, where voter turnout was light compared to the deluge coming in November, the heads of poll workers may be spinning by the time polls close on the presidential election.

“I think I’m already going to be sick that day,” said Ethel Gendron, supervisor of the checklist in Alstead.

The new law was passed by the Republican-dominated N.H. Legislature last spring and withstood a veto by Gov. John H. Lynch. Starting Nov. 6, voters must present a valid ID before receiving a ballot. If they don’t, they can still vote as long as they sign an affidavit and later prove their identity.

...many voters said they were offended by the law after voting in the same place for years.

Some voters were unaware of the new law and didn’t bring any ID; others deliberately refused to show ID in protest. They were allowed to vote, but many election workers fear that come November the system will be severely gummed up with confusion, long lines and short tempers.

Across the state, Seacoast Online reported that voters were insulted to produce IDs for people they've known for decades.

“Some are saying; 'This is ludicrous, I've lived in the state my whole life,'” she said. “It's offensive to have to ask Mrs. Smith, who you live next door to, for an ID.”

Frugal New Hampshire residents aren't happy about having to cough up $10 for an ID if they don't have one. Today, the League of Women Voters and the ACLU sued to overturn the law. Reports the Associated Press:


They argue that the law freezes out eligible voters from participating in the upcoming state and federal elections and asked a judge to block the law’s enforcement...

‘‘Students are left with either signing a statement that doesn’t reflect New Hampshire laws or being forced to give up their constitutional right to vote,’’ said Joan Ashwell, election law specialist for the League of Women Voters of New Hampshire.

Posted by Teamster Power at 4:53 PM