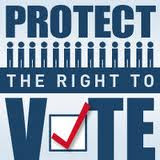 The law was clearly aimed at stealing the election for Mitt Romney. They even admitted it. Pennsylvania's House Majority leader was caught on tape saying his state's voter suppression law "is gonna allow Governor Romney to win the state of Pennsylvania."

The law was inspired by the insidious American Legislative Exchange Council (ALEC), a dating service for corporations and anti-worker state lawmakers.

Here's more from the Center for Media and Democracy:


As many as 800,000 people in the state do not have the forms of ID required under the law, and only 7,200 have obtained the free voter ID cards since the law was passed. With the 2012 elections just six weeks away, "there is too little time, too many people, and nothing in the statute that guarantees people will be able to get the ID they need," (plaintiffs' attorney David) Gersch said...

The bill passed on party lines and was signed into law in March under a cloud of partisanship. Like most of the 37 states that have introduced strict voter ID bills since 2011, Pennsylvania's law was introduced by an ALEC member and reflects elements of the ALEC model Voter ID Act. In June, Rep. Mike Turzai (R), an ALEC member, declared that voter ID “is gonna allow Governor Romney to win the state of Pennsylvania.”