Vice President Joe Biden and his wife Dr. Jill Biden got a warm welcome from New Hampshire Teamsters at Local 633 on Saturday.

Joining our Teamster brothers and sisters were carpenters, firefighters, teachers and SEIU members. They were ready to put their boots on the ground to get out the vote in November. Biden got them even more motivated.

Vice President Joe Biden sought to rev up union support in yet another crucial swing state Saturday, stopping by the local Teamsters headquarters to address members getting ready to canvass neighborhoods on behalf of the Democratic ticket.

The vice president professed his loyalty to the crowd soon after taking the podium. 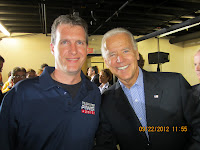 (Fox seemed to think that was a bad thing.)


Vice President Joe Biden rallied union workers at a Teamsters union hall Saturday, saying their door-to-door efforts would be an antidote to the millions of dollars spent on advertising by Republican-leaning super PACs.

Biden told teachers, firefighters and other union members at the rally in Manchester that the middle class wouldn't exist without organized labor and that he was counting on them to counter political advertising promoting the Republican ticket.

"We're going to be outspent by these super PACs considerably," the vice president said.

"There's only one antidote, and the people of New Hampshire are used to this ... it's a knock on a door, it's somebody saying 'Look, I know what you just heard, what you just saw in that ad ... I'm here to tell you, I know these guys ... I vouch for them.'" 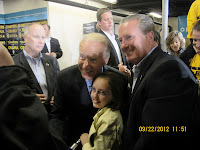 Biden said he was glad to hear GOP presidential candidate Mitt Romney and running mate Paul Ryan talk about the struggles of the middle class but said they also should acknowledge the policies Ryan voted for in Congress caused those difficulties. A Romney-Ryan administration would bring more of the same, Biden said.

"They're doubling down on everything that caused the economic crisis in the first place," he said.

Dennis Caza, Local 633's political coordinator, said days of preparation went into the vice president's visit. But it was worth it, said Brother Caza:

I think it’s nice to have a vice president come to your union hall.

Posted by Teamster Power at 3:18 PM