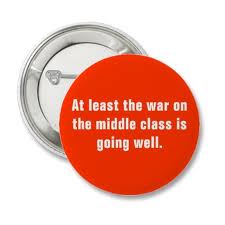 Procter & Gamble, the consumer products behemoth, agrees. The company decided to make most products for either the rich and the poor. Few will be aimed at the middle class:


In a marked shift from P&G's historic focus on middle-class households, "the world's largest maker of consumer products is now betting that the squeeze on middle America will be long lasting," The WSJ reports.

This is no small matter or a minor change by a second-tier firm: P&G has at least one product in 98% of U.S. households, The WSJ reports. U.S. sales totaled about $30.5 billion in its latest fiscal year, about 37% of its total, while accounting for 60% of the firm's $11.8 billion profits.

The company is engaging in what The WSJ calls a "fundamental change" in how it markets products in the U.S. "We're going to do this both by tiering up in terms of value as well as tiering down our portfolio down," CEO Robert McDonald says.

As noted above, P&G isn't the only company coming to the same conclusion: Heinz is following a similar strategy to P&G while Saks is focusing its attention more on high-end consumer vs. 'aspirational' shoppers.

Meanwhile, Citigroup has created an index of 25 stocks designed to profit on this hourglass theme, including Estee Lauder and Saks as the top and Family Dollar Stores and its ilk at the bottom. The strategy has returned 56.5% since its inception in December 2009 vs. 11% for the Dow, another statistic reflecting the hollowing out of America's middle class.

Here are some scary statistics to explain why the company is doing what it's doing:


• The middle class, defined as adults with household incomes ranging from $39,000 to $118,000, has fallen back in income for the first time since the end of World War II.

• Among that group, 85 percent say it’s more difficult now than a decade ago to maintain their standard of living.

• The Census Bureau reports the middle class now makes up about 51 percent of U.S. adults, down from 61 percent in 1971.

Posted by Teamster Power at 8:59 AM