Wage theft in Philadelphia -- and elsewhere 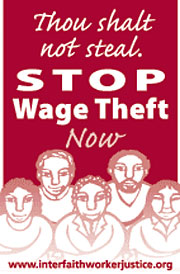 
Wage Theft and Low Wage Work in Philadelphia
by dsalaborblogmoderator

by Stuart Elliott
Talking Union contributor Jake Blumgart has written a couple of outstanding articles on low-wage workers and wage theft.  In an interesting cover story  on wage theft in Philadelphia’s City Paper. He portrays some victims of wage theft: an undocumented carpenter, a waitress forced to share tips with her manager, and a coffee shop worker who wasn’t paid overtime despite working every day for two weeks. He also places the problems of low wage workers in historical perspective with some surprising facts.


In the past, unionization was a strong option for workers who wanted to defend against employer abuses. During the 1950s, within the now theft-wracked restaurant industry, 25 percent of America’s waitresses were unionized. Today, just 1.5 percent of food-service workers are organized. There are few remaining unionized independent restaurants in greater Philadelphia: the stadium-adjacent McFadden’s, Hymie’s Deli in Lower Merion and the Pen and Pencil Club, for example. Now, organizers tend to focus their efforts on the industry’s biggest employers, like food-services provider Aramark.

Nontraditional worker organizations provide an alternative to unions, but in Philadelphia there are only two options: the Taxi Workers Alliance of Pennsylvania and the Restaurant Opportunities Center (ROC), which is barely a year old.

A recent report from the Progressive States Network gives Pennsylvania an F for its anti-wage theft efforts and shows why they are so inadequate.

They are alternatives, Blumgart notes.


The fact is, legislative models do exist. In recent years, Seattle and Miami passed anti-wage-theft ordinances, while Madison, the District of Columbia and San Francisco have bulked up enforcement.

The wage-theft law passed in Florida’s Miami-Dade County in 2010 is one of the nation’s most compelling. It allows workers to contact the Department of Small Business Development with wage-theft complaints, and requires employers to answer those complaints with documentation. If the case cannot be settled, it goes to an administrative hearing. If the employer is found guilty, he or she must pay back the original wages and damages worth twice the original amount to the employee and administrative costs to the county.

In another article (“Want to Fight Poverty, Philly? Start at the Bottom, With the Low-Wage Jobs“) in the Next American City, Blumgart notes


Manufacturing isn’t intrinsically remunerative work: Workers, citizens and legislators faced challenges through the years to eventually turn those jobs into potential gateways to the middle class.

Now that the economy has changed dramatically, these battles are being fought on new ground. Security guards in the office towers of Center City are organizing with the gargantuan Service Workers International Union, while their counterparts at the Art Museum and the University of Pennsylvania have formed an independent, locally based union.

Posted by Teamster Power at 5:32 PM