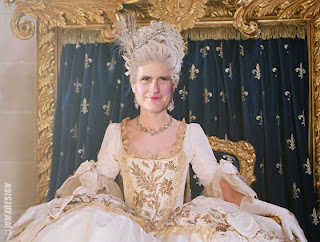 Mitt Romney and his family have had many "Marie Antoinette" moments. Ever since his first Senate run in 1994 (against Edward M. Kennedy), they've sounded like French aristocrats rather than American Republicans.

Nearly 20 years ago, Ann Romney was interviewed by Jack Thomas of the Boston Globe. She actually said that when they were first married she and Mitt were "struggling" students. And this:

...we had no income except the stock we were chipping away at. We were living on the edge, not entertaining.

More recently, Mitt Romney aroused a furor when he made the "I'm not concerned about the very poor" comment. That seems to be the one that inspired the graphic above.
And now David Cay Johnston explains how Romney, as Republican presidential nominee, wants America to look like Europe in the 1700s:


Their approach favors dynastic wealth with largely tax-free (Romney) or completely tax-free (Ryan) lifestyles, encouraging future generations of shiftless inheritors. What we need instead is a tax system that encourages strivers in competitive markets, not a perpetual oligarchy...

Under Romney’s plan your economic future would be determined the same way it was in 18th Century France - primarily by who you picked as your parents, not by hard work, perseverance and that illusive element of luck.

Johnston points out we've already tried the Romney-Ryan proposal to cut taxes for the rich -- under George W. Bush and Ronald Reagan.  It hasn't worked, except to make the rich richer.


The Romney tax plan is Bush II on steroids. The Paul Ryan plan is Romney supersized.

Johnston quotes tax experts who say the Romney-Ryan plan would increase most Americans' tax burdens by 50 percent. The rich would pay less in income and capital taxes. Sounds lovely -- if you're already a multimillionaire.


Read Johnson's whole piece here. And if you're not a voter, please register to be a voter.