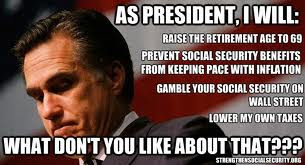 Our brothers and sisters at AFSCME note,


Those concerned that Mitt Romney is out of touch with the realities facing most of us in America got a powerful ally on Friday in the form of… Mitt Romney.

That’ll be news to middle-income households, who actually earn about $50,000, according to a new report from the Census Bureau.

There was quite a lot of commentary in the tweetosphere about that under the #middleincome hash tag. Here's a sample:


@DxxAbroad: @MittRomney 's idea of "lower income" is a family that can't afford dancing lessons for their horses. #GOPFAIL #MiddleIncome

@ndvillanueva: if #MittRomney thinks #MiddleIncome is $250K, most Americans must be peasants to his eyes. #arrogance #Election2012 http://t.co/zUGSggXV

@zpg410: #middleincome Only have one yacht.

@zpg410: #middleincome Your car has to take the stairs because you're too poor to get it an elevator of its own.

@THEJordanBrown: #MiddleIncome is only keeping your money in one offshore holding account.

Posted by Teamster Power at 3:24 PM