About 270 Alpha drivers and attendants who transport Northern Illinois schoolchildren fought for years for respect and decent working conditions.  Many of the school children have special needs. The bus workers simply want a living wage and safer buses.

Chanté Jones, a driver at Alpha, describes their struggles:


This is a multi-million dollar company because of us, but we barely make enough to support our families. We need better safety standards and to be treated like human beings by this company. I know we are going to make a change, as long as we continue to stick together and form our union. 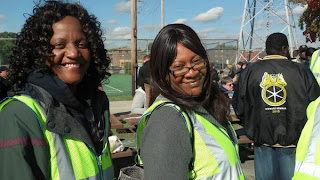 
Thank you for transporting our children. Thank you for having the courage to stand up to an employer that would rather keep you down. We are proud of you and we are standing together with all Alpha workers.

Jim Glimco, president of Teamsters Local 777 in Lyons, said the drivers and attendants haven't wavered in their fight to form a union since 2010.


You are an inspiration to school bus workers and workers everywhere who want a better life, and the ability to stand up to their anti-worker, anti-union employers.

Mixon told the Alpha drivers and attendants that 1.4 million Teamsters from all over the U.S. and Canada are behind them.
Posted by Teamster Power at 11:54 AM