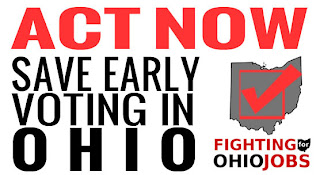 This just in from ThinkProgress: Ohio will have early voting after all.

Here's the story: Republican Secretary of State John Husted tried to limit early voting hours in Democratic counties. He also tried to expand early voting areas in Republican counties. (How transparent is that?) And when two Democratic voting officials said they'd defy him, he fired them.

After an uproar, Husted tried to limit early voting everywhere. A federal judge told him he couldn't do that. Husted said he'd ignore the court order.

Today, he backed down:

Ohio Secretary of State Jon Husted (R) today reversed course on his decision to block county boards of elections from setting their own early voting hours in the days leading up to the November election...

Facing a direct court order, Husted has chosen instead to back down. This afternoon, Husted’s office released Directive 2012-42 with a brief message: “Directive 2012-40 is hereby rescinded.” As a result, county boards of elections will now be allowed to set their own hours, pending Husted’s appeal of the Obama for America v. Husted decision.

Chalk one up for the good guys.