We help out our brothers and sisters when they're ill, even after they've retired. 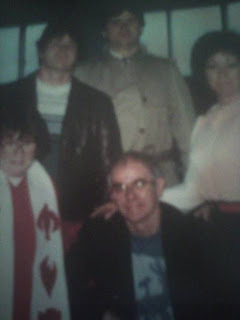 I completed this essay about my father, Patrick, after hearing the poet Dr. Maya Angelou discuss the meaning and importance of dignity and respect.

HONK…HONK. “I wonder where that is coming from,” I said to my father.

“I don’t know,” he said. A lifelong truck driver, my father recognized the powerful sound, but it was unusual to hear it in our neighborhood. Honk…honk. The truck moved closer to our house. My father struggled to the window to see the excitement.

I was a student at Temple University in Philadelphia. Like on most days, I had awoken early for school and helped my father with his breakfast that consisted of pureed food, orange juice, and myriad vitamins and prescription drugs.

My father, though only 49, was battling a terminal illness, Amyotrophic Lateral Sclerosis, better known as Lou Gehrig’s disease, a progressive degenerative disease of the nerve cells in the brain and spinal cord that causes rapid muscle deterioration. Patients typically live between three and five years after diagnosis; my father was is in his fifth year.

Though predictable in medical circles, my father’s decline in health was shocking to everyone who knew him. He had been a paratrooper with the 82nd Airborne Division and served in the Korean War. Once a strapping 6-foot-2 and weighing 210 pounds, he was now a fraction of his former self. He was confined to a wheel chair and struggled to breath and talk. His food had to be pureed due to his inability to swallow.

It was an extremely difficult time for my family and me. We struggled to balance work, school and my father’s care. As his disease progressed, so did the emotional and financial toll on our family.

Honk…honk. The truck slowed down, engaged its air brakes and pulled in front of our house. It was a large Mack truck, with the distinctive Mack bulldog displayed prominently on the hood. Two large men jumped out of the truck.  They opened the trailer doors, unloaded several boxes, and walked toward our front door.

“Is this the Malloy house?” the other asked.

“Is Pat Malloy here? We are from the Philadelphia Teamsters Local 500.”

My father had been a lifelong truck driver and proud member of the International Brotherhood of Teamsters, and at one time served as a union shop steward. He had been forced to give up truck driving a few years earlier, physically unable to perform the job.

The men entered the house and greeted my father, who was sitting in his wheelchair near the front door. They introduced themselves. My father couldn’t raise his arms or hands, so they placed their hands on his shoulder.

“Hi Pat, we are from the Teamsters. We want you to know that we are thinking about you and your family. We stopped at the Nu-Way Market on Haines Road and picked up some groceries for your family.”

My father became overwhelmed with emotion and began to cry. Tears streamed down his face. He struggled to find words. “It’s been hard...we have had a hard time...thank you,” he said.

My father wasn’t demonstrative. He was a tough man, born and raised in a working-class neighborhood in Philadelphia, yet there were times when he was open and friendly and warm, especially when neighbors or relatives visited or when we had a backyard cookout. Even at all the christenings, the confirmations and the graduations, I never saw my father cry.

The men emptied the truck, carrying several boxes of groceries for our family. We stored the food in the pantry and refrigerator. After the food was safely put away, the Teamsters said their goodbyes and departed.

This is part two in Chuck Malloy's series on his father. Visit our donate or volunteer pages to see how you can get involved to support people with ALS.
Posted by Teamster Power at 6:54 PM