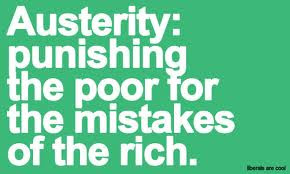 Greek workers have endured massive cuts over the last several years and have repeatedly been forced to use the one thing they still have: the power to withhold their labor.


The country’s prime minister, Antonio Samaras, has been pushing a package of pension cuts and public salary reductions worth $14.6 billion next year in order to satisfy the conditions of its February aid package from the rest of Europe. In a country with 24 percent unemployment, those measures are already inciting protests and labor unrest.

Up to 200,000 are protesting in Athens and major public services including transportation have been shut down. Smoke and teargas fill the streets in front of the parliament building and protesters have been joined by police who are also upset about the additional cuts.

You’d think European leaders would have gotten the hint the last couple of times Greeks struck against the priorities of the elite.

Clearly austerity isn’t working. And one of the big selling points for budget cuts – that workers have been living beyond their means and are lazy – isn’t working either. Greek workers (the ones who still have jobs) work the longest hours in Europe.

Austerity is doing a lot of damage in Spain, too – so much so that the country’s Catalonia region is threatening to secede.


Police beat protesters near the Parliament in central Madrid [on Tuesday], firing rubber bullets and charging the crowds…The massive protests we’re seeing in Madrid today [are happening] in advance of what will likely be another austerity budget by the Spanish government. The people only suffer from continued austerity at a time of 25% unemployment. So they filled the Plaza de Espana and elsewhere to call for changes

The crisis in Europe might be the strongest argument against the politics of austerity. It makes us wonder why so many politicians in America continue to push for the same anti-worker policies that are unraveling whole countries on the other side of the Atlantic.

As Dayen at FDL explains,


The common thread here, as well as in Portugal, is resistance to austerity. This has been a feature of Europe for months and has not generally slowed the march down the path of budget-cutting… The bond market participants and financial market analysts thought that Europe had gotten through its rough patch… But the people, for some reason, don’t support needless suffering. Go figure.