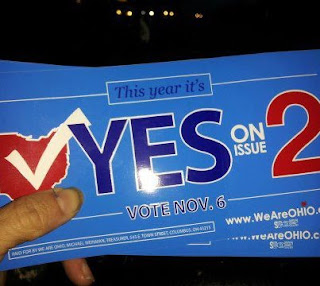 
We Democrats were over run by the Republican's majority in this state.  Since they had control they re-did all the Congressional districts and the Statehouse districts to their advantage.

The League of Women Voters said it was wrong. They disagreed, and wanted to take it out of the control of the party in power, to draw fair districts that would be more competitive and fair.

Voting Yes takes it out of the legislative control and puts in the hands of a quasi-independent committee to make a fair determination of the population. Vote yes on this NEW ISSUE 2. It has nothing to do with last year's issue 2. VOTE YES ON ISSUE 2 ...hope this helps.

Yes it does, Bob.

For a shorter version: Vote for fairness in redistricting.
Posted by Teamster Power at 10:55 AM