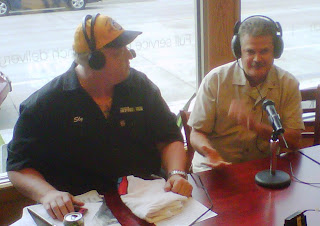 Sly Sylvester (wearing a Local 200 cap) and Tom Millonzi.
Our Teamster brothers from Local 200 were on the radio this morning telling Milwaukee about Koch whore Gov. Scott Walker's union busting.

At 6 a.m., Local 200's Secretary-Treasurer Tom Millonzi and Business Representatives Randy Monroe and Steve Nelson joined Sly for the "Solidarity with Milwaukee" broadcast on on 1670 AM WTDY.
Writes Nelson


Millonzi provided the listening audience a dissertation on the effects of WI Act 10 on the workers in Wisconsin and the upcoming recall elections.

Sly has been outspoken in criticizing some Democrats for downplaying the issue of collective bargaining in the recall races. Here's what he had to say: 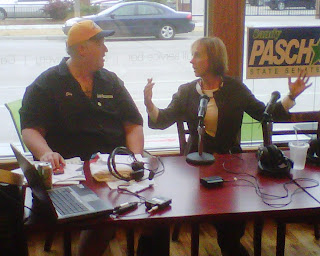 These recall races aren't exclusively about collective bargaining but they were the impetus for this mass uprising and democrats need to make it crystal clear that once they are elected, workers rights will be restored. This isn't the time for retribution or for us to eat our own but that doesn't mean it's unreasonable to expect some accountability on this fundamental issue.

Sandy Pasch was also on the broadcast. We understand our brothers and sisters in Milwaukee are working hard for her to unseat Darling. Pasch has overcome a 9-point-deficit and is now neck-and-neck with Darling.

We'll try to get some sound from the broadcast.
Posted by Teamster Power at 3:38 PM