Here’s what we union thugs do in Canada 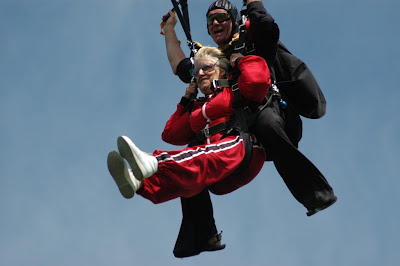 We jump out of planes to make dreams come true for sick children.

Eleven members of the Teamsters Quebec Women’s Caucus recently threw themselves to the heavens at an incredible 200 kilometers per hour (that’s 124 miles an hour).

The brave Teamster women performed the parachute jump as a fundraiser to benefit Children’s Wish Foundation International, an organization that enhances the lives of children with life-threatening illnesses.

The Teamsters raised $7,000 to benefit the Foundation through the sale of raffle tickets. On the ground, 30 Teamsters and friends awaited a smooth landing.

Brigitte Sottile, director of education for Teamsters Canada and president of the Teamsters Quebec Women’s Caucus, spearheaded the jump:


This was a once-in-a-lifetime opportunity to help this good cause. It was not only a joy to contribute to this fundraising event, but a point of pride for each of us who made the leap. We pushed our limits to do something good for the kids.