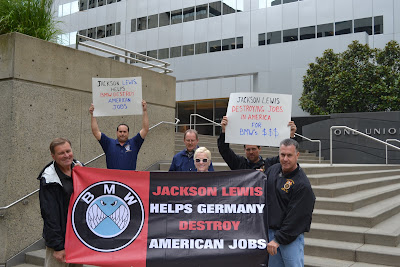 That may be a teensy bit simplistic, but you get the idea.

Jackson Lewis is helping BMW destroy 100 American jobs in Ontario, Calif., for no other reason than it can get away with it. Even after BMW got a low-interest loan of nearly $4 billion from the American-taxpayer-funded Federal Reserve Bank. BMW is basically firing longtime, loyal employees in order to hire workers at poverty wages.


Every working American should be dismayed by — and afraid of — what BMW is doing.


BMW got bailed out with nearly $4 billion in low-interest American taxpayer loans, and in exchange, they’ve hired union-hostile lawyers to mock America’s plant closing laws. BMW is planning to layoff its longtime, dedicated workforce, and their Jackson Lewis lawyers keep sending us letters saying they refuse to discuss alternatives with us.


Dozens of Teamsters and BMW employees rallied outside the offices of labor law firm Jackson Lewis on Tuesday and handed out yellow fliers accusing the firm of helping BMW "destroy American jobs" as they tried to draw attention to an issue that has agitated union members in recent months.

The protest drew onlookers at the crowded intersection of 7th and Figueroa in downtown L.A. as a Teamsters truck circled the block and other cars honked their horns in support.

The Teamsters are protesting a BMW decision to lay off 68 employees at BMW's plant in Ontario and replace them with contract workers provided by a third-party logistics company.

"It's just corporate greed," said John Soto, who makes $25 an hour with benefits; he worries he'll lose his Moreno Valley home if he loses his job Aug. 31.